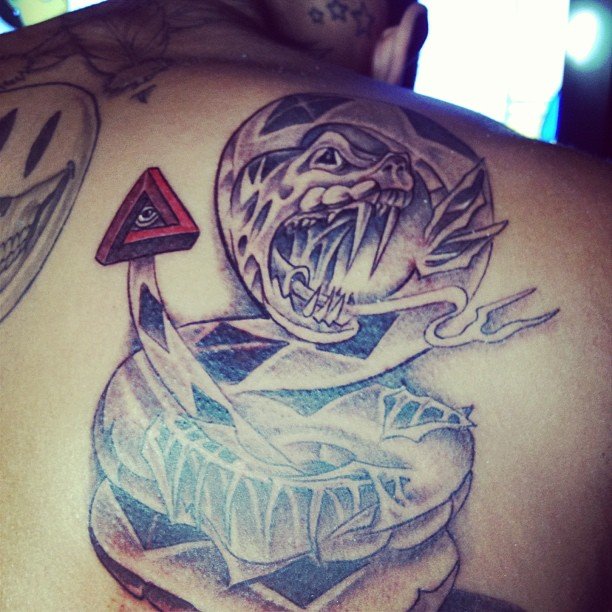 Chris Brown has made headlines again, this time for the new snake tattoo he got on his back on July 12, 2012. Chris Browns new tattoo is inked on his upper back and features a large snake meant as a tribute to his birth year – 1989, the Year of the Snake. But getting a snake tattooed on his back isn’t the only thing that put Chris Brown in the spotlight this time; his reference to the “impossible triangle” in his back tattoo has sparked controversy about a potential love triangle and his possible ties to the Illuminati, too! Check out Chris Browns snake tattoo and tell us what you think.

It was only a matter of time before Chris Brown and girlfriend Karrueche Tran got matching tattoos, right? On July 12, 2012, the couple hit the tattoo parlor together and got similar tattoos representing their Chinese birth years, both of which were inked by Breezy’s favorite tattoo artist, Peter Koskela. While Chris Brown chose a Chinese zodiac tattoo that represents his birth year, 1989, which is the Year of the Snake, Karrueche opted for a tat that celebrates the Year of the Dragon – 2012. Chris Browns new tattoo features a pretty big and vicious-looking snake tattoo, inked on his upper right back. In the tat, the snake’s body is coiled up, but you can see that his tail sports a red triangle with the “all-seeing eye” inside it. Chris Brown took to his Twitter account to share the new tattoo with his followers, along with the caption, “The impossible triangle: year of the snake!!!” The R&B singer must be in the mood for some new ink these days, since Chris Brown’s snake back tattoo was revealed within just two weeks of his wolf Indian chief tattoo and “Bandit” chest tattoo.

The New Chris Brown Tattoo as a Love Triangle?

Back when the two superstars were dating, Chris Brown and Rihanna got matching stars tattoos inked on their necks. Well, those two are splitsville now, and CB proved just how much he cared about new girlfriend Karrueche Tran when he got a tattoo of her face inked on his arm amid rumors that he and RiRi were getting back together. That didn’t stop the rumor mill though; when Chris Brown got his wolf Indian chief tattoo inked on his neck in June 2012, there was talk that the intimidating ink was meant as an F-you to Drake, with whom Breezy was involved in a New York club brawl last month. Rihanna eventually got dragged into the mess when people began speculating whether the fight between Drake and Chris Brown involved the Bajan beauty, who has dated both guys in the past.

According to Chinese horoscopes, those that embody the sign of the snake “are not great communicators and can become quite possessive when they set their minds on achieving the interest of a partner.” Uh-oh…that sounds exactly like Chris Brown! Now that Chris Brown’s snake tattoo with the “impossible triangle” has been unveiled, rumors are swirling yet again: Could Chris Browns back tattoo be a depiction of the love triangle between Breezy, Rihanna and Drake? Or the one between CB, Rihanna and Karrueche?

Remember when Rihannas cross tattoo on her collarbone was unveiled back in March 2012, and the world was in an uproar about the singer’s apparent act of “godlessness,” representing her ties to the Illuminati? Well, guess what? Chris Browns new tattoo has spurred similar rumors, given that the R&B star chose to include the “all-seeing eye” inside the triangle on the snake’s tail. 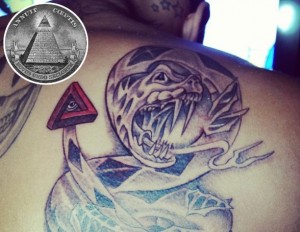 Because a symbol that is commonly interpreted as being associated with Illuminati and Freemasonry is the all-seeing eye that sits on top of the pyramid, which you can find on the one-dollar bill, the singer has been pegged as a member of this secret society. It does seem rather interesting that Breezy chose to include the all-seeing eye in his new snake tattoo, and to make the triangle on the snake’s tail red, just like Rihanna’s cross tattoo. What do you think of his supposed ties to the Illuminati and Freemasonry?

The Snake Tattoo and Penrose Triangle

Since Chris Brown accompanied the picture of his new snake tattoo with the phrase “the impossible triangle,” it seems likely that the ink was meant to represent the Penrose triangle. Also known as the Penrose tribar, the Penrose triangle was first created by Swedish artist Oscar Reutersvard in 1934, and is considered an impossible object. The mathematician Roger Penrose popularized the symbol in the 50s, describing the triangle as “impossibility in its purest form.” 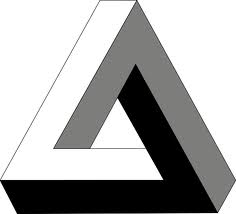 The Penrose triangle is featured in the works of well-known artist M.C. Escher, whose previous depictions of impossible objects worked as an inspiration for the Penrose triangle, and now its included in Chris Browns new tattoo too! If you take a close look at how the 3-D triangle is designed in Chris Browns snake tattoo, you can see what is meant by the triangle’s “impossibility.” Now that you know what everyone else thinks the new Chris Brown tattoo means, which “impossible triangle” do you think the singer was referring to?

One Response to: Chris Brown Supposed Illuminati Ties Show in New Back Tattoo