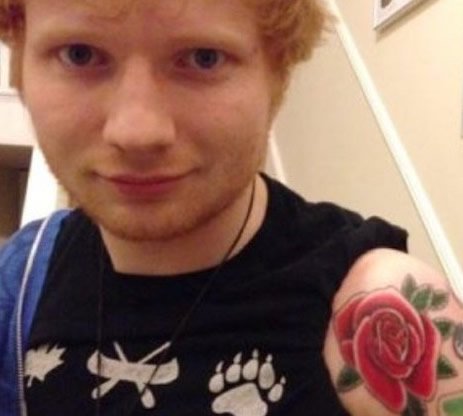 Ed Sheeran has a serious collection of vibrant, colorful tattoos covering his left arm, and the singer added a bright red rose tattoo to that same arm just last week. Ed’s new tattoo is inked on the upper part of his left arm/shoulder, and features a simple rose design with the petals inked in red and the leaves in green. Apparently, Ed already had a black outline of the rose tat when he performed at Madison Square Garden back in November, but it wasn’t until December 27, 2013 that he had the tattoo filled in with color. There are a couple of different ideas about the meaning behind Ed’s rose tattoo; read on and let us know what you think in the comments section below!

Rumor has it that Ed Sheeran’s tattoo has something to do with music or a particular song or album, much like his Puss in Boots tattoo, which pays homage to his track “Wake Me Up,” and his tribute tat to Taylor Swift’s Red album that he made a guest appearance on. According to Ed himself: “Basically all my tattoos kind of revolve around songs on my record,” which has us wondering if Ed Sheeran’s rose tattoo could be a teaser for a song off his upcoming album, which is set to be released in February 2014. Or, it could be a tribute to love à la Perry Como’s 1956 track “The Rose Tattoo,” which goes, “He wore the rose tattoo to prove his love was true.”

Another interpretation of the ink is that Ed’s rose tattoo may actually have been inspired by the singer’s good buddy and fellow tattoo-lover Harry Styles. Back in September, Harry Styles added a new black and white rose to his left arm, and just three months later, Ed Sheeran has gotten a new rose inked on his left arm, and it looks an awful lot like Harry Styles’ tattoo! Harry trusts Ed so much that he even let the 22-year-old tattoo his skin, although he now says he regrets the tiny black padlock tattoo Ed inked on his wrist. Fortunately, Ed Sheeran didn’t let Harry return the favor, and instead headed to tattoo artist to the stars, Kevin Paul, for his rose arm tattoo.

There’s no doubt that there is a little bit of a “bromance” going on between Harry and Ed, and the pop stars actually share a “bro tat” as a tribute to a British claymation children’s television series called “Pingu.” According to Ed, it wasn’t too hard to convince Harry Styles to get his “Pingu” tattoo; he simply mentioned getting the ink and Harry said, “Alright then.” The tables may have turned this time though, since it appears that Ed Sheeran’s tattoo may have been influenced by Harry’s rose tat. What do you think Ed’s rose tattoo was inspired by: music, love, his friendship with Harry Styles, or something else?