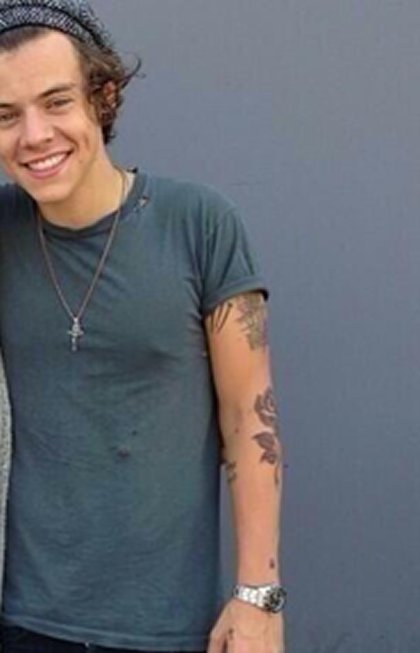 Harry Styles may be getting some tattoo inspiration from Justin Bieber and Cheryl Cole these days, because the One Direction singer has just debuted a brand-new tattoo on his arm and it features a large rose! The new ink comes while Harry Styles is enjoying a two-week break from touring in Los Angeles, and despite the fact that the heavily-tattooed pop star recently admitted that he regrets some of his ink. If there’s one thing we have to say about Harry’s rose tattoo, it’s that we’re thrilled he is finally moving away from those tiny random doodles he has inked all over his body!

Harry’s new tattoo features a large black rose – stem, leaves and all – and is inked directly below the enormous ship tat he got inked on his left arm while he was dating Taylor Swift in December 2012. The ship tattoo has, and probably always will be, linked to Taylor, not just because she was at the tattoo parlor with Harry when he got it inked, but because a near-identical tattoo was spotted on the arm of a dude in one of the songstress’ music videos as well. Harry has faced quite a bit of criticism regarding his ship tattoo and we are happy to say the new rose tattoo on his arm is a vast improvement over some of his other ink.

The placement of Harry Styles’ tattoo could possibly raise some eyebrows, considering the fact that it is so close to the infamous ship tattoo and because roses are traditionally a symbol of love, beauty and romance. Rumor has it, Harry regrets losing Taylor Swift and reportedly told her during a post-VMA dinner date that “he was mad to let her go.” It could be that the rose tattoo is a secret tribute to the one that got away. Some people also think that Harry’s rose tat may be a tribute to One Direction’s track “Best Song Ever,” in which Harry sings, “Said her name was Georgia Rose, and her daddy was a dentist. Said I had a dirty mouth, but she kissed me like she meant it. I said can I take you home with me, she said never in your wildest dreams.” Ooooh, what a tease!

Rose tattoos have been popular tattoo designs for both men and women for decades, and have shown up on the bodies of other pop stars recently, including Cheryl Cole and Justin Bieber. In fact, while Justin and Harry’s rose tattoos are slightly different in design, they are inked in almost the exact same location. Hmm…we wouldn’t be surprised if Harry was taking tattoo advice from the tattoo-obsessed Justin Bieber!

The image of the rose on Harry’s arm marks the singer’s 44th tattoo and, get this, he is only 19 years old! If anything is certain it’s that there will definitely be more Harry Styles tattoos in the future!