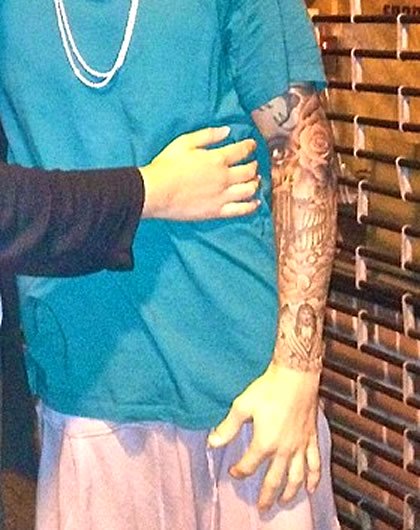 It looks like Justin Bieber is that much closer to having a full-on sleeve tat with the addition of an intricate rose tattoo to his left arm late in the night on August 1, 2013. Shortly after his performance at the Prudential Centre in New Jersey on Thursday night, Justin headed to tattoo artist and pal Bang Bang’s NYC tattoo parlor for some ink, and left with a big rose design on his arm, just above his owl tattoo and below his tiger tattoo, connecting the two. This addition pretty much makes his arm tattoos into a full-sleeve, with a few spaces still available on his upper arm and the possibility of some on the back of his arm. Fans snapped a few pics with JB as he left the tattoo parlor after being there for about four hours, and his new tattoo was on display in a few of the photos. Bieber revealed his latest ink to the public on Friday, August 2 via Instagram, adding the quotation “Art” to his pic. Guess he is pleased with Bang Bang’s work!

Speaking of “Art,” Justin Bieber’s tattoo of the rose on his arm may actually be a case of err…art imitating life. According to reports, a few days before getting the rose inked as part of his sleeve, the Biebs showed up to former flame Selena Gomez’s 21st birthday party with a single stem of the same flower. Hmm…sounds like JB’s rose tattoo may also be a tribute to Miss Selena! 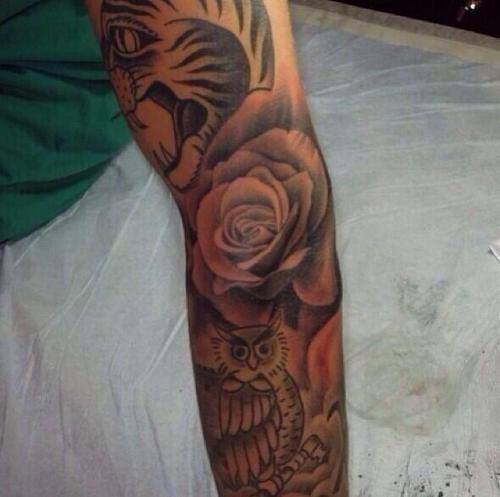 Having already completed a half-sleeve with his knight, castle, waves, and cross tattoos, Justin needed something to connect his upper-arm tiger tattoo, eye tattoo, and owl tat into a more solid design, and a huge rose is what he has chosen. BUT, does this really make it a full-sleeve? Well, almost. There is still theoretically some space that needs to be covered to make his arm a full sleeve, such as above his tiger tattoo and the back of his arm, around the tricep area. In order to really be a full sleeve design, these spots would need to be inked as well. Do you think Justin is already planning on it? Yeah, so do we.

When the Biebs revealed his rose tattoo addition on Instagram, one would have expected the majority of his fans’ reactions to be something like “nice tat” or “love the tattoo” or something of the like. However, this was not the case. When scrolling down the comments of the latest Justin Bieber tattoo, words like “please stop” and “no more tattoos” jump out, showing some fans are not so stoked on his mass collection of ink. Indeed, the Instagram pic received over a half-million likes, so we guess most people don’t mind his ink too much. Besides, it’s his body, he can do and express whatever he chooses with it, and lucky for us, ink is his first choice!