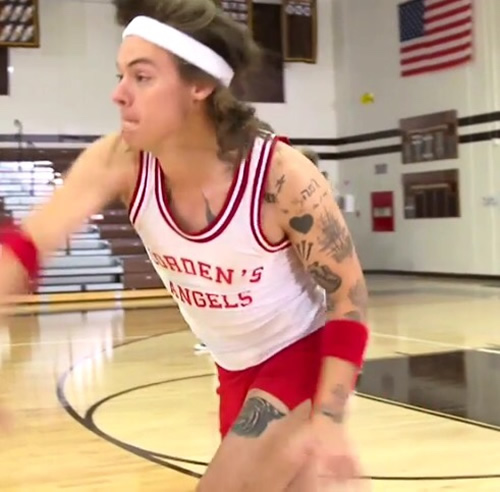 Guys, we have finally discovered what that mysterious Harry Styles’ thigh tattoo is!! You know, the secretive design that’s been driving you all crazy trying to figure out whether it’s a monkey rope knot, like we originally thought, or something else, like a whale, a seashell or an owl. So, are you ready to find out what it actually is?? Well…it’s a tiger! Unlike some of his other tattoos, Harry Styles appeared to be keeping his tiger thigh tattoo under wraps for some reason, possibly because of the sensitive location of the ink (although he did basically drop trou during a concert in Rio de Janeiro to show off his “Brasil!” thigh tattoo last year). Whatever the reason for keeping it secret, we are thrilled to finally know the design of Harry Styles’ tattoo!

During a recent interview with BBC Radio 1 and host Nick Grimshaw, the One Direction boys were asked to answer questions posed by fans from all over the world via video chat. Unfortunately, because Harry Styles is ill at the moment and was told by the doctor that he could either sing or talk, the pop star was unable to speak during the interview, but he did download an app that spoke his answers in a robotic Siri-like voice when he typed them into his phone. During the interview, Harry was asked, “What is your thigh tattoo and what is the meaning?” His robotic response was “Tiger! Roaaaar!” So now we finally know that Harry Styles’ tattoo features a pretty good-sized tiger head.

One of the first glimpses we got of Harry Styles’ tattoo on his thigh was back in April 2015, when comedienne Chelsea Handler posted an Instagram photo of Harry wearing a pair of short Nike shorts that unintentionally showed off some never-before-seen ink on his upper left thigh. That pretty much drove all One Direction fans into a frenzy, as they tried to figure out what the tattoo could be. The second time we saw the mysterious Harry Styles tattoo was the following month, when the singer and his bandmates donned some super short shorts for a dodgeball skit on The Late Late Show with James Corden. It was pretty tough to make out the actual design of the tattoo without getting a better look at it, but now we know it’s a tiger!

Tigers and tiger heads are pretty popular tattoo designs, especially for men, and former One Direction member Zayn Malik also has a tiger tattoo, inked on his upper left arm and shoulder. Tigers are regal creatures, and tiger tattoos can represent a number of things, including power, pride, passion, courage, strength, beauty or ferocity. Although Harry didn’t reveal the actual significance of his tiger thigh tattoo during the BBC Radio 1 interview, the singer’s “Roaaar!” answer to the fan question leads us to believe ferocity is probably one of the top contenders for Harry’s tattoo meaning!