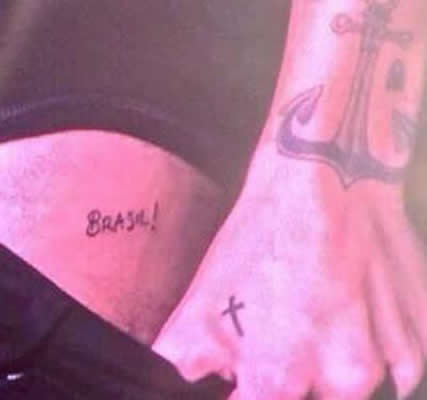 Harry Styles sent fans into a frenzy during a May 8 concert in Rio de Janeiro, as the singer unzipped and pulled down his skinny jeans to reveal a brand-new “Brasil!” tattoo on the upper thigh of his left leg, dangerously close to his groin area. The Rio de Janeiro show was part of the Brazil leg of One Direction’s Where We Are tour, and Harry is obviously enjoying his time in South America, performing for fans, hanging out with his bandmates, and getting some new ink too! Just two weeks ago, during a show in Colombia, Harry inadvertently revealed a new tattoo of two large ferns on his stomach when he raised both arms in the air and his shirt lifted up. The next stop on 1D’s Where We Are tour is São Paulo, the largest city in Brazil, and then on to Europe, where we hope Harry goes under the needle again!

It’s been a busy couple of months for Harry Styles, who has added six new tattoos to his collection since January 2014, including an anatomical heart tattoo on his left bicep and a large anchor tat on his wrist. Many of Harry Styles’ tattoos have been strategically placed to cover up ink that the singer obviously regretted getting done, like the “Things I can’t” tattoo he used to have on his left forearm, and the “I can’t change” tat that used to grace his left wrist. Even as he covers up those random phrase tattoos though, Harry has added yet another textual tattoo to his collection with his new “Brasil!” ink. In between songs at Parque Olimpico in Rio de Janeiro, Harry Styles stepped to the front of the stage and directed a cameraman to zoom in on his leg, where he got the small tattoo inked in black capital letters.

Although Harry Styles’ tattoo reveal is one for the record books, he isn’t the first pop star to get a tattoo inspired by Rio de Janeiro. Back in November 2012, Lady Gaga got a “RIO” tattoo inked on the back of her neck, with a cross symbol in place of the “I.” According to Gaga, “the font [for the tattoo] was derived out of the signatures of three fans, all from different neighborhoods and ages. Represents how music brings us 2gether.” Harry Styles’ “Brasil!” tat may not be as deep or meaningful as Lady Gaga’s tattoo, but the 20-year-old was obviously inspired enough by the band’s time in Brazil that he decided to get a tribute to the South American country permanently etched on his skin. We can’t wait to see what happens when One Direction hits Europe in June!

One Response to: Harry Styles Drops His Pants to Reveal His…..New Tattoo