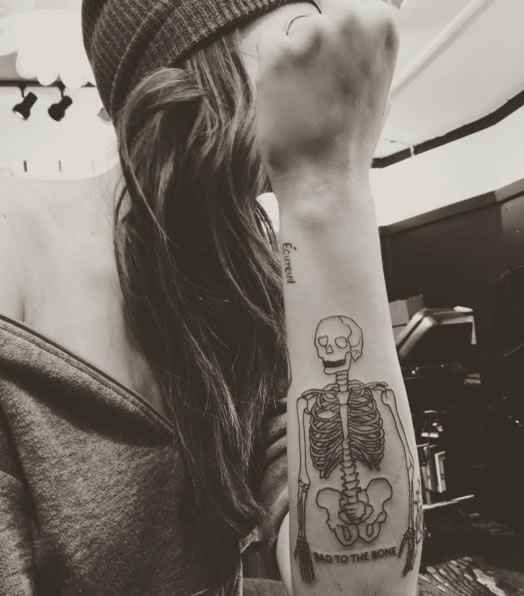 Ireland Baldwin is quickly becoming one of the most tattooed models out there, and last week the daughter of Alec Baldwin and Kim Basinger added yet another inking to her collection – a skeleton on her forearm with the words “Bad to the Bone” tattooed below it in capital letters. Ireland Baldwin’s tattoo was revealed on Instagram on November 12, and the 20-year-old captioned the tattoo snap “Bad, bad girl.” Ireland Baldwin’s tattoo is inked in black and white on the outside of her left forearm, and features a full cartoonish skeleton, but without the legs, and the skeleton’s hands are book-ending the “Bad to the Bone” phrase.

Ireland Baldwin’s skeleton tattoo joins a growing number of strange tattoos the model has gotten inked recently, including a Hello Kitty tattoo on her arm, a line portrait of David Bowie’s famous alter ego Ziggy Stardust on her shoulder, and a tattoo of the French word for “squirrel” she got last month on her arm as a tribute to her father, 57-year-old actor Alec Baldwin. Perhaps Ireland Baldwin’s most noticeable tattoo is the massive mandala floral design she has inked on her upper left arm, although many of the model’s tattoos are pretty in-your-face.

It’s obvious that Ireland Baldwin loves tattoos, and the model already has more than a dozen pieces, most of which are inked on her left arm. In addition to her Ziggy Stardust, “Ecureuil,” Hello Kitty and floral mandala tattoo, Ireland also rocks a tattoo of a pink lace bra on her left forearm, a long black arrow inked on the back of her upper left arm, a lotus flower tattoo on her left forearm, and a tattoo of a black cat mask on her left wrist with the phrase “we can be heroes.” If we had to take a guess, we would say that the 20-year-old may be working her way towards a full sleeve!