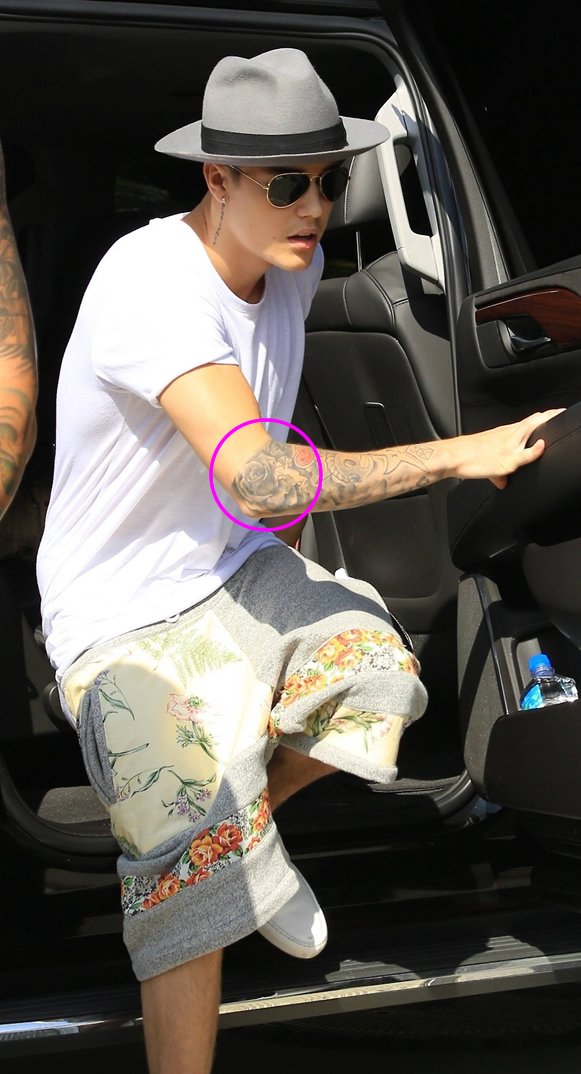 While Justin Bieber may have slowed down slightly on the tattoo front, it was only a matter of time before he was back under the needle again. About a week ago, we spotted a dark shadow of ink on the elbow region of Justin’s right sleeve that he did a great job of hiding, but our hawk eyes identified it. This time the singer opted for an elegantly placed black and white rose tattoo that fits in perfectly above his cherub and heart tattoos. The new rose tattoo is also in nearly the same place as the one on his left sleeve, which served to connect his upper and lower arm ink. So we think it’s a safe guess to say Justin is preparing to keep moving on up to a second complete sleeve.

So what made Justin choose another rose tattoo? Well for one, roses are a complex flower, and a popular tattoo design as well. Obvious rose symbolism may include delicate beauty or love, but there is a wealth of culture behind rose symbolism that can vary based on different elements, including color and whether or not the rose is “open”. So one interpretation is Justin could be showing he’s still open to love, like a rose in full bloom. 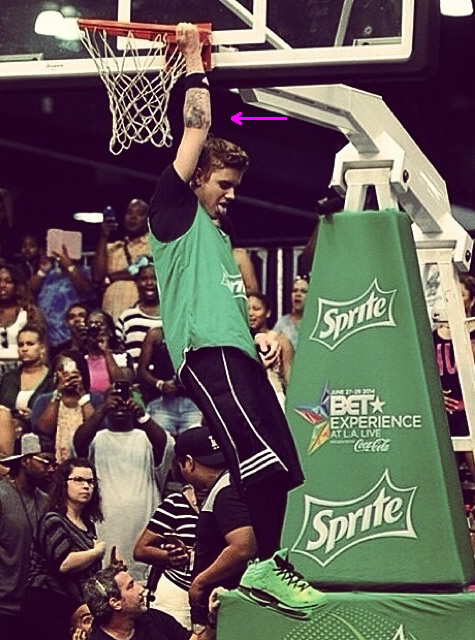 Also in tarot culture, the rose is considered a symbol of balance. The beauty of this flower expresses promise, hope and new beginnings. It is contrasted by thorns, which symbolize defense, loss and thoughtlessness. That example fits perfectly with singer/skater boy, Justin Bieber, because either in his life or on his board, he’s always battling to keep things balanced.

Also Justin chose to have this tattoo inked in classic black and white, like most of his tattoos, but with a rose, that could hold a meaning all in itself. Black roses are often considered a symbol of death and farewell. (This is not necessarily morbid; it can carry a message of memorial too). For instance, in mythology, Aphrodite (the Greek goddess of love) was often depicted with roses adorning her head, feet and neck. This can be interpreted many ways, but the association comes from a rose bush that grew within a pool of blood spilled by her slain lover (Adonis), and so a common interpretation is that the rose symbolizes an immortal love that withstands time, and even death. Which, as we often speculate here at Pop Star Tats, may tie back into his on-again, off-again love affair with Selena Gomez.

We know two things for sure though. One, is that Justin is clearly going to finish covering his right arm in tattoos, and the other is with this being his third rose flower-themed tattoo, it’s no secret that Justin, raised by his single mom, is not afraid to show off his sensitive side for all to see.