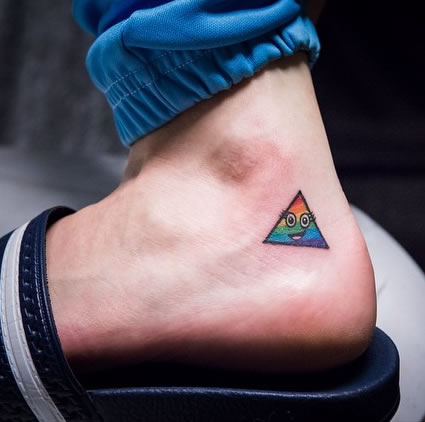 Katy Perry has made a tradition out of getting a cute little tattoo every time she finishes up a new world tour, and when her go-to tattoo artist Bang Bang posted an Instagram photo last week saying he was joining Perry and crew for a week on tour, we just knew a new tattoo was in the works! Lo and behold, Bang Bang posted another Instagram pic on March 26, which showed him working on the pop star’s ankle, followed by an image of Katy Perry’s brand-new ink: a small triangle (or prism) on the outside of her left ankle, inked in rainbow colors and featuring a very happy, smiling face.

The third concert tour by Katy Perry, The Prismatic World Tour, is in support of the singer’s fourth studio album, Prism (released in 2013), and began in May 2014 in Belfast, Northern Ireland. After touring through Europe, the United States, Canada, Mexico, Asia, South America and New Zealand, Katy’s tour will finish up in October of this year, which means she still has seven months to go before it’s over. Katy obviously didn’t want to wait until concluding the tour to get her new triangle ink, which is a cute little number that will forever remind her of her Prismatic World Tour, a larger-than-life event described by critics as “a spectacle of costumes and colors.”

After finishing up his always-awesome work on the tattoo-loving pop star, Bang Bang shared a photo of Katy Perry’s new triangle tattoo on March 26, along with the caption: “@katyperry’s newest addition. Katy thank you for everything, I’m so appreciative that I’ve had the opportunity to travel with you and your crew of amazing people. It’s truly a blessing that I am always the one you call. Congratulations on the end of your prismatic world tour. I’ll see you at Disney.” The permanently cheery prism tattoo, which we’re guessing may also be inked somewhere on Bang Bang’s body, is inked from top to bottom with red, orange, yellow, green, blue and purple colors.

Katy Perry’s brand-new triangle tattoo joins several other tour-inspired tats on her ankles, including a smiling red and white peppermint tattoo on the inside of her right ankle, in honor of her California Dreams tour (2011-2012), and a smiling red and green strawberry tat on the inside of her left ankle, as a tribute to her Hello Katy tour (2009). Some other more recent Katy Perry tattoos include the Hello Kitty ink she had done on her finger in October 2014, and the XLIX finger tattoo she had inked just last month to commemorate her epic Super Bowl halftime performance.