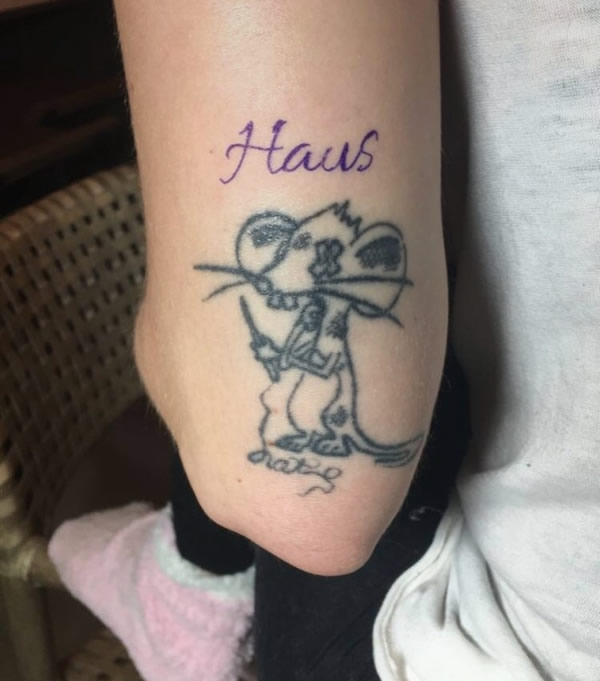 If Lady Gaga is known for one thing (besides her tattoos), it’s her unexpected and, to say the least, daring fashion choices (remember the meat dress she wore to the 2010 MTV Video Music Awards??), so when it came to getting a new tattoo this week, the obvious choice was a tribute to her personal creative team, Haus of Gaga, which has helped her get where she is today. Lady Gaga showed off her latest tattoo – her 21st to date – just this week, and the ink is a simple script word reading “Haus” on the back of her left arm, just above the mouse tattoo she had done in 2013, for her sister Natali.

True fans of Lady Gaga know that the creative team called Haus of Gaga is responsible for helping to bring the singer’s signature personality and style to life over the years, so it’s no wonder the pop star decided to honor them with a permanent tattoo. Gaga shared a photo of her “Haus” tattoo on her Snapchat account this week, along with the caption, “Almost our 10 yr anniversary Haus tattoos,” hinting that other members of the creative team (or all of them!) may have gotten matching “Haus” tattoos with the singer. In the Snapchat post, Lady Gaga’s “Haus” tattoo is purple, but it’s unclear if the actual tattoo was done in purple ink, or if that’s just the temporary stencil for the artist to follow.

According to reports, Lady Gaga’s latest tattoo was designed by a member of Haus of Gaga, which makes it all the more likely that other members of Gaga’s squad got the tattoo with her. This “Haus” tattoo comes just two months after Lady Gaga debuted a fresh tat on her inner arm dedicated to her latest studio album and her late aunt, Joanne, for whom the album was named. Gaga and her father, Joe Germanotta, got matching “Joanne” tattoos in honor of his late sister, who died of lupus at the age of 19. Many of Lady Gaga’s tattoos were done as tributes to the people she loves, such as the “dad” tattoo on her shoulder and her multiple monster-inspired fan tattoos, and this latest piece is no different. 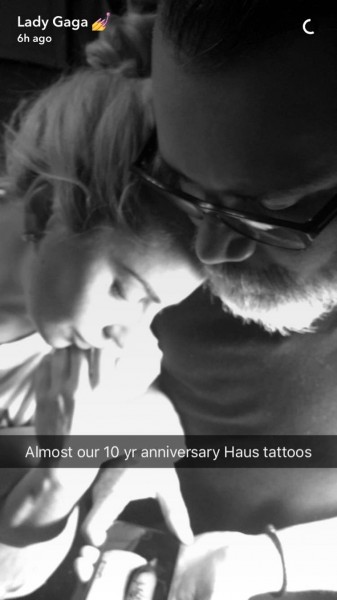 Even as Lady Gaga added a brand-new tattoo to her collection, the singer chose to cover up her extensive ink while meeting the British royal family in London earlier this month. For the special event, Gaga donned a stunning silk halter-style Brandon Maxwell gown, which would have put her myriad tattoos on display, but she decided to cover them up with makeup instead, just like she did for the Golden Globes earlier this year.