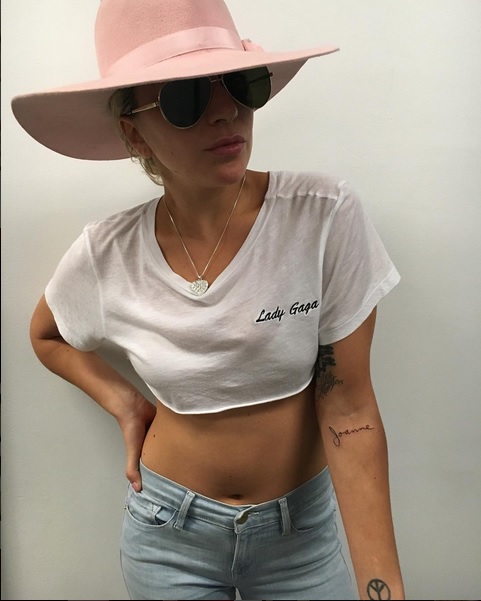 When Lady Gaga decided on the title of her third studio album, ARTPOP, she gave fans a little preview by posting a photo of a fresh “ARTPOP” tattoo on her arm, and the pop star has done it again, this time revealing a tattoo of the name “Joanne” on the inside of her forearm, a touching tribute to a beloved family member and the title of her fifth studio album. To make the album title ink even more special, Gaga’s father, Joe Germanotta, got a matching “Joanne” tattoo on his shoulder!

In a series of photos posted to Lady Gaga’s Instagram account on October 24, the singer showed off a brand-new tattoo on the inside of her left forearm, featuring the name “Joanne,” which is the title of Gaga’s latest album, out now. Joanne is the name of Lady Gaga’s late aunt, her father’s sister, who died at age 19 of complications from lupus. The pop star captioned the Instagram snaps, “Got Joanne tattooed on my arm in her actual signature. My dad got one too. With an angel on his shoulder.”

Lady Gaga already rocks an angel tattoo on the back of her head, which she had done live, during the launch of her new fragrance, FAME, in September 2012. At the time she had her angel tattoo done, Gaga said it was in honor of photographer Terry Richardson’s mother, who had passed away earlier that month, but it’s possible the ink is also a tribute to her aunt Joanne. After all, during a recent interview on The Howard Stern Show, Lady Gaga called her aunt her “guardian angel or spirit guide.” 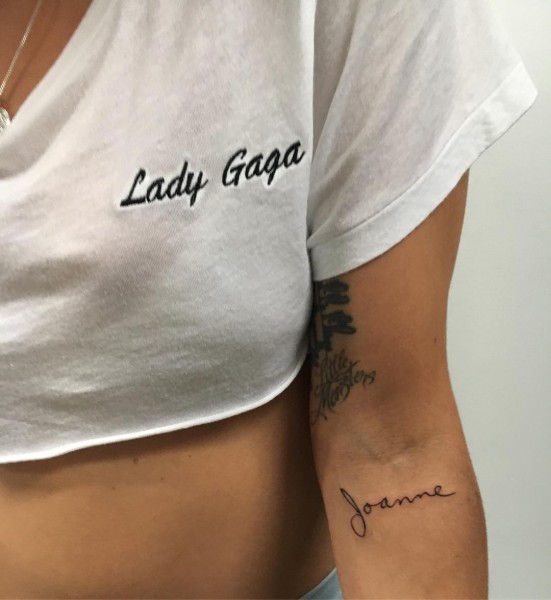 According to Lady Gaga, who never met her aunt but was named after her, Joanne was “like this goddess who we worshipped in our family our whole lives. Her picture was always up, and it was framed so beautifully in the house. We talked about her all the time, every family meal.” Her love for her late aunt led Gaga to name the album after her, and the pop star says she feels Joanne’s spirit more now that she’s finished writing the album. “I feel that I’m channeling her more now because I’m finished with the record and I can feel her spirit and the excitement of her message coming through the album.”