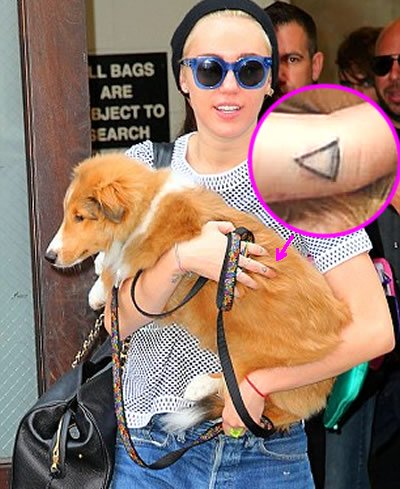 It was only a matter of time before Miley Cyrus immortalized her infamous tongue-sticking-out move with a tattoo, and the inked-up singer treated us to a glimpse of the new tat while flipping the bird to a photographer in New Orleans on March 17. Miley took to the stage to perform Sir Mix-a-Lot’s Baby Got Back at the Cat’s Meow karaoke bar in New Orleans on Monday night (completely unaware that her tour bus had just blown up, btw), and then hit the street with long-time friend and assistant Cheyne Thomas, giving the finger to a photographer who tried to snap a shot of the pop star in her high-waisted denim shorts and black beanie hat. We would normally find this incredibly rude, but Miley’s antics actually gave us a pretty good look at her new middle finger tattoo – a small black smile with a red tongue sticking out. Classic.

Miley Cyrus had tongues wagging just last week when she revealed her new tattoo of a “sad kitty” inked on the inside of her bottom lip, and now she’s got an actual finger tattoo of a tongue wagging – her signature move of late, we’re sad to say. Miley debuted her “sad kitty” lip tattoo during a session with the Flaming Lips at a recording studio in Tulsa, Oklahoma, and it’s assumed that she had the bizarre ink done on March 14, during the Tulsa leg of her Bangerz world tour. Now that we’ve seen this new Miley Cyrus tattoo, we’re guessing the singer’s tongue finger tat was done the same night, because it was on display during an on-stage performance several days later. Miley’s tongue tattoo is inked on the top of her right-hand middle finger, just above her Michael Jackson-inspired “BAD” tat.

We’ve never been huge fans of Miley Cyrus’ finger tats – we actually thought she was finally done with those tiny random tats – but at least they stood for all the things that she thought were important: love, equality, faith, karma, etc. Judging by her latest finger tattoo, Miley now thinks that sticking out her tongue every chance she gets is also super important. We get that sticking out her tongue is now Miley’s signature move, next to twerking that is, and, like her “sad kitty” tattoo tribute to the crying kitten that played in the background during her American Music Awards performance in 2013, the new finger tat serves as a reminder of a fun time in the singer’s life. That being said, we are extremely tired of seeing Miley Cyrus’ tongue, and we’re not thrilled that we can now see it even when her mouth is closed. Tell us what you think of Miley Cyrus’ tattoo in the comments section below!