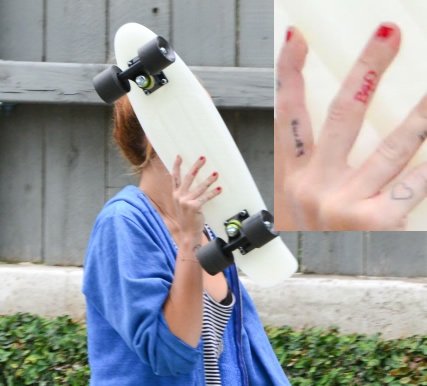 Think back to July 2012 and see if you can remember Miley Cyrus sporting the word “BAD” in red ink on her finger. You may have passed it off at the time as a temporary tat inked in red pen, but you should know better than to dismiss Miley’s obsession with tiny finger tats. We are now sure that Miley Cyrus’ “BAD” ink is a permanent tattoo, and we have evidence in the form of new Miley Cyrus photographs posted online just last month. We took a glimpse of the pics and noticed that the red “BAD” was still there, which means it must be a new tat.

Miley Cyrus is telling the whole world, “I’m bad, I’m bad; really, really bad,” with some brand-new ink! The 19-year-old singer got a new tattoo on the outside of her right-hand middle finger that says “BAD” in red capital letters, further proving that she has ditched her Disney image and is embracing a new bad-ass persona suitable to her current punk-rock hairstyle. Miley Cyrus’ tattoo featuring the word “BAD” on her finger was inked back in July 2012, but those with eyes keen enough to spot the small red inking passed it off as temporary. However, in a new PSA for Rock the Vote, you can see a newly blonde and razored Miley writing “WE WILL!” in an effort to encourage everyone to vote this November. Take a peak at her right hand and you can see the red “BAD” tattoo still going strong two months from it’s first debut! In another series of pictures from a Miley Cyrus photo shoot, you can also see the new finger tat, which means…it’s real!

Miley Cyrus’ finger tattoo was first spotted earlier this summer when the singer was carrying a skateboard in her right hand, clearly displaying the red ink on the middle finger of her right hand. Although the crude tat looks at first glance to be written in red pen, if you look closer you’ll notice that it almost exactly matches the album title of Michael Jackson’s seventh studio album – titled Bad and written in red ink on the album cover. So what’s the connection between Miley and Michael? The 19-year-old has referred to herself in the past as “a huge fan of Michael Jackson,” naming the king of pop her greatest inspiration of all the male artists in the world. When MJ tragically passed away in 2009, Miley posted online, “Michael Jackson was my inspiration. Love and blessings.”

While Miley Cyrus may have drawn inspiration from Michael Jackson in regards to her own music career, it seems the teen singer also sympathized with the king of pop a little bit, in reference to his total exposure to the media from such a young age. Miley told MTV in a 2010 interview: 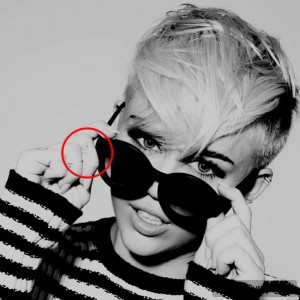 Take a look at the first pic of Miley new “BAD” tattoo from July 2012, and you’ll see that the fingers on her right hand are scattered with tats, including a heart tattoo, an equal sign, an eye ball, the word “karma,” a peace sign, and a cross. If Michael Jackson was such a huge inspiration for Miley, it’s no surprise the pop star chose her finger for the MJ-inspired ink. The numerous tattoos inked on Miley’s right hand seem to be the most important to her, and with positive messages like peace, love and karma, Miley’s new “BAD” ink is now in good tattoo company.