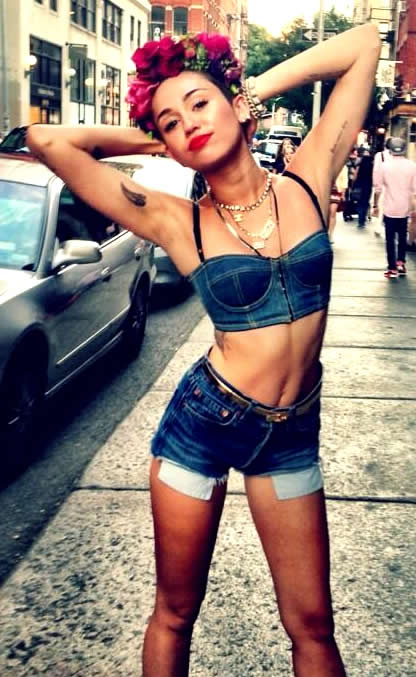 Miley Cyrus has finally revealed the tattoo she got inked on her arm earlier this month – which appears to be a large claw or tooth – and the singer once again has us all wondering what the mysterious ink represents. What we do know for sure is that Miley’s arm tat was inked by tattoo artist to the stars Kat Von D on August 4, as we noted in a previous post, after which the artist posted online “Woke up so amped! Did a fun tattoo on @MileyCyrus last night…” Now we finally know what Miley got inked on her arm that day! Miley Cyrus’ new tattoo features a black and white image of what appears to be a curved claw or tooth from a large animal, possibly a bear or lion. The claw tat is inked on the inside of Miley’s right bicep, in the same spot as the “love never dies” tattoo on her left bicep. The claw tat is the third tattoo in a row Miley has gotten inked by Kat Von D, who is also responsible for the singer’s anatomical heart tattoo and crossed arrows tat on her arm. Obviously Miley is pleased with Kat’s work, and we’re predicting more tattoo collaboration from these two in the future!

Miley’s family heritage includes Cherokee Indian, and some of the singer’s tattoos in the past were inspired by her background, including Miley Cyrus’ dream catcher tattoo on her side. It’s possible that the claw tattoo on the pop star’s arm could also draw from her Cherokee roots, which Miley seems to be pretty proud of. According to Native American beliefs, the bear symbolizes physical strength and leadership, and the bear paw is typically meant to stand for the power of the animal spirit, representing inner strength. It seems likely that a tattoo of a bear claw would have a similar meaning, and this interpretation definitely fits with Miley’s MO in the past. Some Native American tribes associate nears with healing powers, and often wore necklaces of bear claws to bring them power and strength. Compared to previous Miley Cyrus tattoos (many of which are tiny symbols inked on her fingers), the singer’s most recent tats seem to have more depth and detail, and are surrounded by an almost mysterious meaning, like the claw tattoo. What do you think Miley’s arm tattoo stands for?