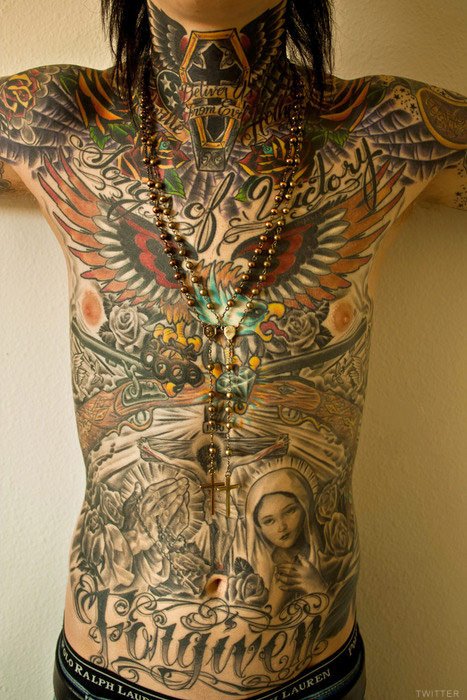 Miley Cyrus’ half-brother Trace has so much ink, he literally had to use his head when thinking of the next place to get a tattoo. And that resulted in a new hairstyle for Trace that is oddly similar to Miley’s new ‘do. Despite the fact that Trace’s style is one-of-a-kind, could it be that Miley is following in the footsteps of her big brother when it comes to tattoos and hairstyles? With her obvious love for tattoos and a shocking new shaved haircut that seems to match Trace’s, it certainly seems that way. We’re just hoping Miley doesn’t go off the deep end and decide to get a couple full sleeves and a new head tattoo. What would Liam say then?!

Miley Cyrus may already have 15 tattoos at only 19 years old, but her older brother Trace is so tatted-up he literally almost has no empty space left on his body. With two full sleeves, chest tattoos, neck tattoos, and ink pretty much everywhere else on his body, Trace may be way above and beyond Miley’s tattoos now, but who knows what the future may hold? And a love of tattoos isn’t the only thing Miley Cyrus and her stepbrother Trace have in common; the two now share matching hairstyles! A few months before Miley debuted a drastic new blonde ‘do with one side of her head shaved, her brother Trace shaved half of his head to make room for what must have been an incredibly painful large Native American chief tattoo. That leaves us to wonder: is Miley taking notes from her tatted-up half-brother Trace when it comes to tattoos and hairstyles? If so, will Miley go so far as to ink up her body like Trace has?

Miley and Trace Have Matching Hairstyles! 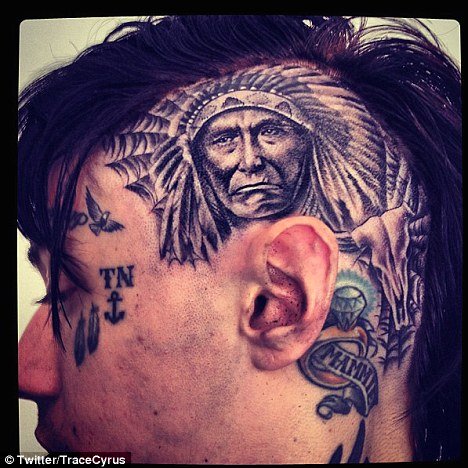 Fans of Miley Cyrus may have been surprised by the teen star in the past because of her increasing collection of tattoos, but no one was prepared for the biggest Miley surprise of all – her new punk-rock hairstyle. Shortly after bleaching her hair blonde earlier this month, Miley decided she was going to crop it off into a platinum pixie cut and then reduce one side of her head to mere stubble. You may have seen it coming though, if you had seen the pictures of Miley’s half-brother Trace posted online back in May 2012. In need of some empty space for his new Native American chief tattoo, Trace decided to shave one side of his head bald, and then had the tattoo inked there.

A Family That Gets Tattoos Together Stays Together

With her frequent trips to the tattoo parlor, it appears as though Miley may be emulating her half-brother, or at least sharing his love for some serious body ink. What’s more, Trace may be getting inspiration for his tattoos from the siblings’ father, Billy Ray Cyrus, who also has a Native American tattoo inked as part of the full sleeve on his left arm. Apparently Trace’s new tattoo on his head was the result of a father-son bonding experience, when Trace and his 50-year-old dad hit the tattoo parlor and got inked together. Trace revealed the following on Twitter: “With my dad! He is getting his back tattooed! Gangster!” Miley also has a Native American tattoo inked on her body – the dreamcatcher tat she has on her right ribcage.

It may be the case that Miley Cyrus is following in the footsteps of her rocker half-brother, inspired by his incredible tattoo collection and his funky new hairstyle. In 2012 alone, Miley has added four new tattoos to her body, and it doesn’t seem like she plans to stop any time soon. A recent Miley Cyrus tattoo is inked on the singer’s left forearm and features a quote from a 1910 speech Teddy Roosevelt delivered at the Sorbonne in France. And with her new nose ring and shocking new hairstyle, which Miley says makes her feel “happy, pretty and free,” she is becoming less of the young Disney “Hannah Montana” Miley that we used to know, and more a rebellious, punk-rock, tattooed, adult Miley – kind of like her big brother, Trace. As Miley continues to add new ink to her own body, we can only hope that she doesn’t decide to go bald and get a tattoo on her head!