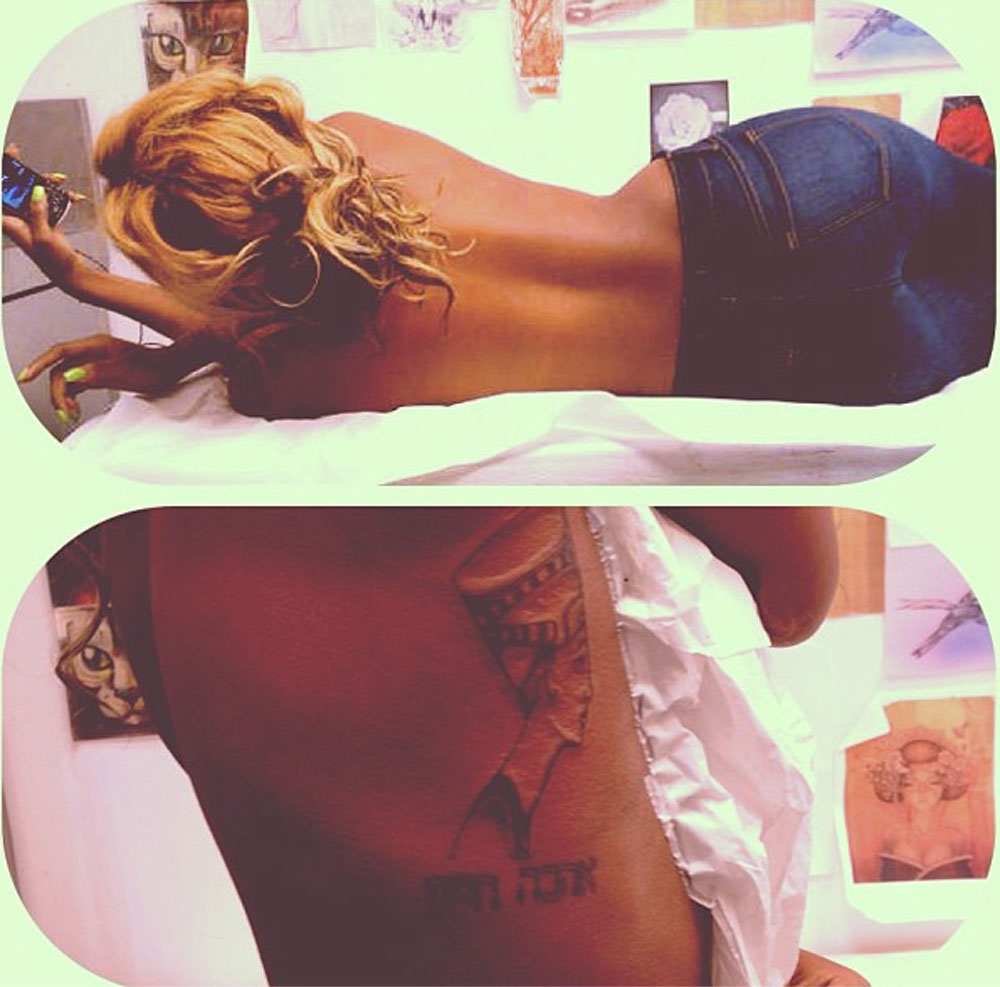 British singer and songwriter Alexandra Burke may be best known for her stint on The X Factor back in 2008, but her new body art is what has the 24-year-old grabbing headlines these days. Burke posted a picture of a brand-new tattoo on Instagram on April 11, and the ink has fans wondering if the pop star intentionally copied Rihanna’s Queen Nefertiti tattoo on her ribcage. Burke’s new Egyptian tat is inked on the opposite side of her body as Rihanna’s, and Nefertiti is facing in the opposite direction, but there’s no doubt that the tats are nearly identical otherwise. RiRi’s ribcage tat is the third Egyptian-inspired tattoo she has gotten inked recently, and the second that people seem intent on copying, in addition to her Goddess Isis chest tat. We wonder what Rihanna thinks of all this copy-cat action?

Singer’s Nefertiti Tattoo is a Bust

What we are assuming was a pre-tattoo shot, Alexandra Burke posted a pic of herself online wearing only jeans and laying on her side, possibly prepping to have her ribcage inked. The singer then revealed the new Egyptian ink, along with the caption “Da latest tat. Get wid it.” Burke’s tattoo is inked on her right side/ribcage area, and the ink depicts a portrait of the legendary Ancient Egyptian Queen Nefertiti, who is widely known for her status, influence and great beauty. Burke’s Queen Nefertiti tattoo is accompanied by foreign lettering, which is located beneath the portrait, but the singer hasn’t yet revealed the meaning of the text. Both Burke and Rihanna’s ribcage tattoos are modeled after the infamous 14th century bust of Queen Nefertiti, which is, ironically, one of the most copied works of Ancient Egypt.

Burke Enjoys the Pain of Getting Inked

Alexandra Burke, like RiRi, seems to be suffering from a bit of a tattoo addition, and, in a 2009 interview, Burke revealed that her record label boss, Simon Cowell, wasn’t too happy with her growing collection. “They’re all hidden. I’m not gonna get any on my arm or anything like that or Simon will kill me,” she said in the interview. “He was like, ‘Why are you getting tattoos?’ and I was like, ‘Because I like them.’” It’s not only the finished product that Burke enjoys though; she also claims that she is addicted to the pain, which explains why she chose such a painful spot as her ribcage to get the Nefertiti ink. In addition to the Egyptian ink, Burke also sports a group of small stars on her right foot (also similar to Rihanna’s stars tattoo and also a very painful tattoo spot), a dove on the left side of her back and her initials “AB” on the inside of her right arm.