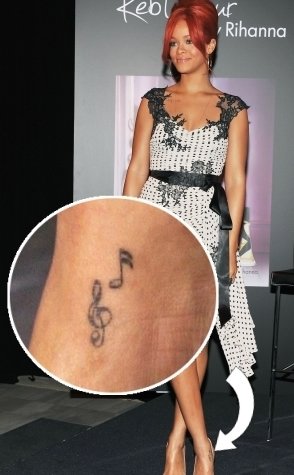 Rihanna loves to hang out in tattoo parlors; she believes that tattoos represent an entire culture, which she finds great pleasure in studying. What has been called Rihanna’s “romance” with tattoos began in 2006 when the superstar got her first taste of ink and unique body art, with her Pisces sign tattoo inked shortly after. The treble clef and sixteenth note mark one of Rihanna’s most discrete tattoos, located on the upper inside part of her right foot. It seems pretty obvious that the pop star’s motivation for getting this music-inspired tat is her passion for and dedication to music, which Rihanna once said was “in her D.N.A.” The meaning  of the ink represents one of the most important aspects of her life – music – which says a lot about Rihanna as a person. Rihanna loves tattoos and admits that getting inked is almost like an addiction for her.

Since getting this first music-inspired tat in 2006, Rihanna has gotten many more, discretely placed on different parts of her body. Although RiRi’s collection of tattoos may seem excessive, all of Rihanna’s tattoos are tasteful and unique and hold a special meaning for the pop princess. Most people choose to get tattoos because they are inspired by something or someone in their lives. All of the Bajan singer’s tattoos were chosen by Rihanna because of the personal and symbolic significance they have for her and for her alone. This is illustrated by the unique and distinctive nature of the singer’s body tats – like her music note tattoo – some of which aren’t always easily decoded by the general public.

Rihanna is a huge fan of tattoos and has succeeded in combining her love for music and ink into a single sexy and stylish foot tattoo. Although the music note and treble clef tattoo certainly isn’t Rihanna’s only tat, the fact that it was her first and represents her love for music probably makes it one of her favorite. For this reason, RiRi raised eyebrows when she got a large falcon tattoo inked on her foot in June 2012, covering up the treble clef and music note. 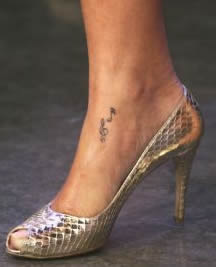 Rihanna’s music note tattoo and many of the singer’s other tats have drawn a lot of media attention, although she isn’t exactly craving the public interest. In fact, Rihanna has said that she gets “bum-rushed” when she hangs out by herself in tattoo parlors, but she goes without security anyway. “I am so intrigued by tattoos,” Rihanna says, “it’s an addiction.”