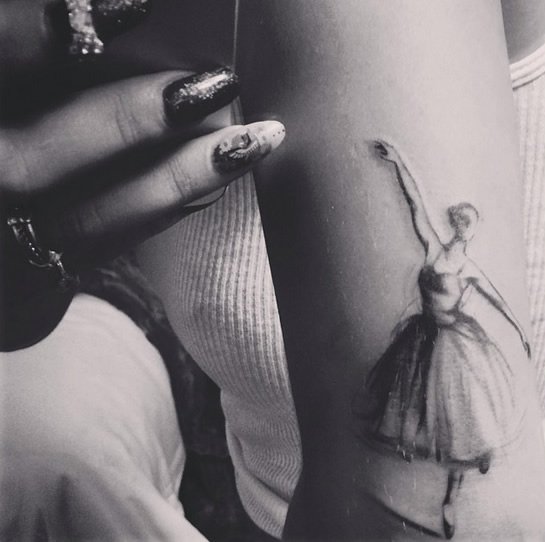 The very same day that Cara Delevingne was showing off her “DD” hip tattoo on Instagram, gal pal Rita Ora was going under the needle herself, adding a cute new ballerina tattoo to her collection. Rita Ora’s tattoo is inked on the outside of her right tricep, just above her elbow, and features a black and white image of an elegant ballerina, mid-twirl. Rita Ora’s latest tattoo comes in the midst of rumors that the pop star has split from boyfriend Calvin Harris, and just a few weeks after Rita bared it all for a steamy photo shoot with controversial celebrity photographer Terry Richardson.

Rita Ora may have just hit a rough patch in her personal life, but much like Cara Delevingne, who went under the needle this week following her breakup with girlfriend Michelle Rodriquez, the 23-year-old underwent some tattoo therapy and already looks like she’s feeling much better. On June 10, Rita’s favorite tattoo artist, Keith “Bang Bang” McCurdy, posted a photo on Instagram of the singer laying on her stomach and baring the beginnings of a new tattoo on the back of her right arm. In the photo, which was captioned “@ritaora #mercerhotel,” you can see a laptop off to the side showing the full image of Rita’s ballerina tattoo.

While many of Rita Ora’s tattoos are textual pieces dedicated to her friends and family, and important quotes or mantras she holds close to her heart, the pop star has dedicated some serious real estate in the past to images of beautiful and powerful women. One of her favorite tats is the large image she has inked on the inside of her left bicep of Aphrodite the goddess of love, who she says “controlled the love” and “infatuated a lot of gods with love.” She more recently added a gigantic tattoo on her right ribcage of “Rosetta,” a pinup girl that originates from a piece by famed 1930s illustrator, Alberto Vargas. “That’s why I was obsessed with it,” Rita has said about the painting her Vargas pinup girl tat was based on, “learning what men don’t understand about women and what women don’t understand about men.”

Although Rita’s new arm tattoo is considerably different than her Aphrodite tattoo and Rosetta ribcage tat, which portray specific, if not real-life, individuals, the ballerina ink probably holds a similar meaning for the pop star. Ballerinas as a whole may be seen by most people as elegant, fragile princesses at first glance, but being a ballerina actually takes an inordinate amount of physical strength, resolve and discipline, all of which lies just below the surface. Maybe Rita is trying to say with her new ballerina tattoo that being a beautiful and wildly successful pop star is actually damn hard work when you get right down to it. What do you all think of Rita Ora’s tattoo?