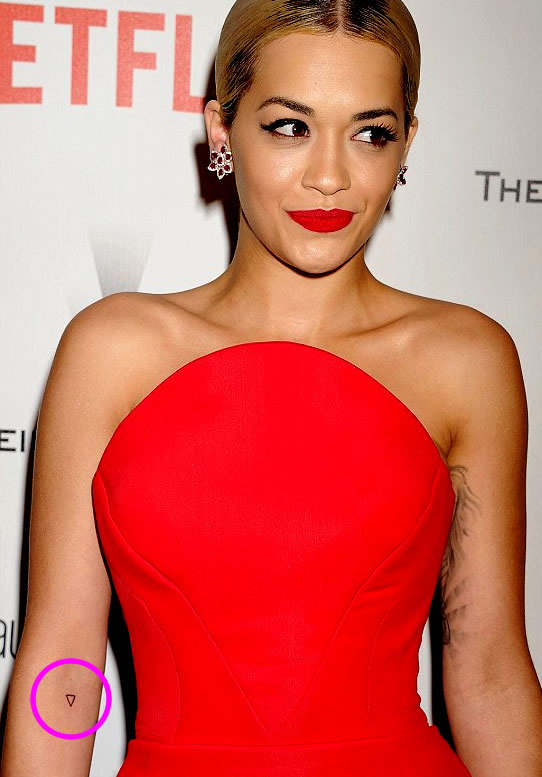 Despite their supposed ties to the Illuminati and Freemason secret societies, triangle tattoos are becoming more and more popular among some of the hottest stars out there today, and Rita Ora is the latest A-list celeb to show off a mysterious new triangle tattoo. Arriving at the 2015 Weinstein Company and Netflix Golden Globes after-party in a stunning red strapless Zac Posen gown on January 11, Rita Ora inadvertently showed off a tiny little triangle tattoo inked on the inside of her right arm, just below her “elbow pit.” Rita Ora’s tattoo is inked in black and features a small outline of an upside-down triangle, much like Miley Cyrus’ triangle finger tattoo that she eventually turned into a colorful slice of watermelon.

With this new triangle tattoo on her arm, Rita Ora joins the ranks of other inked-up celebrities who have opted for triangle tats over the years, some of which are easily explained, and others that remain a bit of a mystery. In addition to Miley Cyrus and Rita Ora, other celebs rocking triangle tattoos – either on their own or as part of a bigger design – include Katy Perry, Lindsay Lohan, Ellie Goulding, Chris Brown and Zayn Malik. So, either all of these celebrities are members of the Illuminati, or else their triangle tattoos have another meaning that is important to them personally. Historically, triangle tattoos can stand for a variety of things, including harmony, creativity, illumination, and the notion of the “trinity,” meaning mind-body-spirit, past-present-future, or father-son-holy ghost.

Rita Ora is no stranger to tattoos (she currently has upwards of 25!!), and she has, in the past, volunteered plenty of information regarding the meaning behind her various pieces of ink, but over the past few months, the singer has quietly revealed a number of small tattoos that most people have failed to notice. After adding a flurry of new ink to her collection towards the end of 2014 and in early 2015 – including her ballerina, feather, arrow, wishbone, heart and smiley face tattoos – we caught a glimpse of another never-before-seen tattoo on Rita Ora’s wrist featuring Japanese symbols, which she likely had inked back in November. And now she has quietly revealed this mysterious triangle tattoo!

We’re not entirely sure yet when Rita had her triangle arm tattoo done, but being that the ink is visible in photos of the singer at the Golden Globes after-party in January, and not in photos of her at the American Music Awards in December, it’s likely she had it done right around the beginning of the new year. What do you all think of Rita Ora’s tattoo??