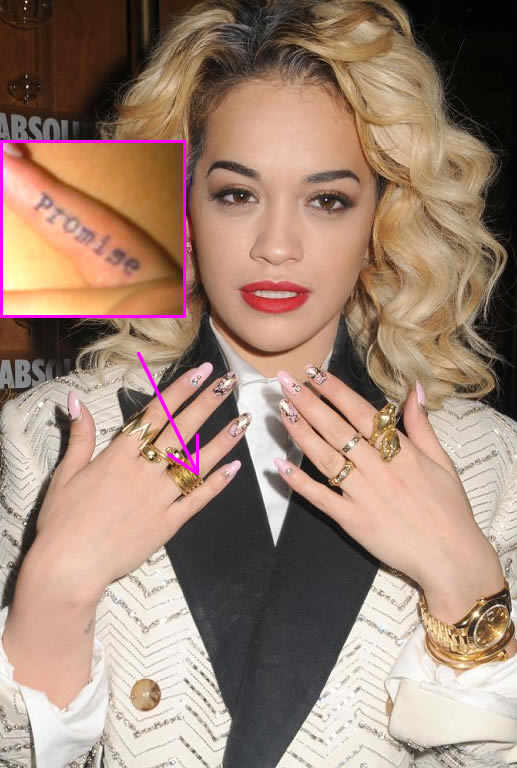 Miley Cyrus may be the reigning queen of finger tattoos, but Rita Ora definitely holds her own when it comes to cute and quirky tattoos inked on the insides of her fingers. The British singer has a few finger tats so far, including the word “Love” on her ring finger in red, the blue “Hope” tattoo on her middle finger, and the word “promise” cleverly tattooed on her right-hand pinky finger. Rita Ora’s tattoo is inked in black typewriter font and suggests the idea of a “pinky promise,” which is something we often make with friends. We’re wondering if there is someone out there with a pinky “promise” tat that matches Rita’s?? Speak up if you do!

We all know that Rita loves tattoos – considering the fact she has more than a dozen tats scattered across her body – but it’s always interesting to discover how such heavily-tattooed individuals explain their ink. “Tattoos to me are really kind of important,” Rita said during an interview with GQ. “I think they’re just beautiful. I love tattoos. I think they’re another form of art.” We have to admit that some of Rita’s tats are pretty cool, especially her cute pinky promise tat. Rita Ora’s “promise” tattoo was inked on her finger in April 2010, and is sort of mysterious because she has yet to explain the specific meaning behind it, if there is one. Then again, she said that she got the “Love” tat on her finger “just because…”

During a Tat Nation interview in August 2012, KDWB host “Big D” asked Rita about her finger tattoos, saying, “The finger ones hurt, right?” 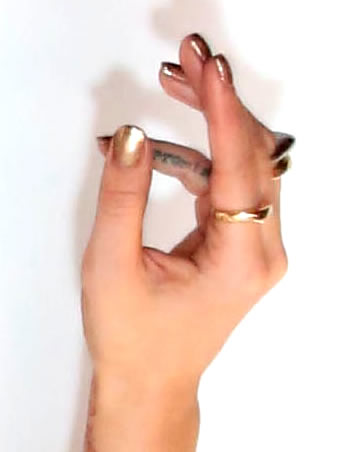 She responded, “Oh, the worst. They’re the worst.” So why does she get them?? We have a feeling finger tattoos are becoming more and more popular among pop stars like Rita Ora, Demi Lovato, Rihanna and Miley Cyrus because they are (or were) unique, and they are also sort of discreet. Most people wouldn’t notice Rita’s finger tattoos unless she chose to show them off, although she did reveal her pinky tat in a funny way back in 2010 when she first got it inked. She tweeted the message: “I got a new tattoo a little one I promise.” Clever girl!