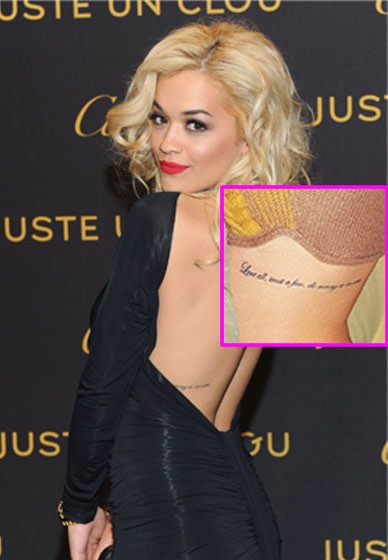 Rita Ora hasn’t quite reached Rihanna status when it comes to tattoos, but she already has more than a dozen tats to her name, including a very practical quote she had inked across her left ribcage sometime before August 2012. The piece is written horizontally from Rita’s abdomen to her back and reads “Love all, trust a few, do wrong to none” in a simple black italic font, which she says is something her sister used to tell her. In reality, the quote “Love all, trust a few, do wrong to none” originally comes from Shakespeare’s All’s Well That Ends Well, a play based on the notion that problems that crop up along the way don’t matter as long as the outcome is favorable. But it’s kinda nice that the side tattoo makes Rita think of her sister!

Rita Ora’s tattoo of the quote “Love all, trust a few, do wrong to none” was inked at the Shamrock Social Club in Los Angeles, the same tattoo parlor that inked some of Harry Styles’ tattoos, and is located in almost the exact same spot as Rihanna’s tattoo that reads “Freedom in God” in Arabic. Although not as well known as the quote “All’s fair in love and war” that Rita sports on her hip, the singer’s ribcage tat is still very meaningful. In the Shakespeare play, the quote reads in its entirety:

Love all, trust a few,
Do wrong to none: be able for thine enemy
Rather in power than use, and keep thy friend
Under thy own life’s key: be cheque’d for silence,
But never tax’d for speech.

Rita May Be Looking for Love!

“Tattoos to me are really kind of important,” Rita has said about her extensive collection of ink. “I think they are just beautiful. I love tattoos. I think they’re another form of art.” Although Rita has more than a dozen tats overall, the majority of her ink is inspired by the idea of finding love now or in the future. In addition to her ribcage tattoo, Rita has a number of other tats related to love, including the “All’s fair in love and war” tattoo on her hip, a tat that says “love me” on her wrist, the Greek goddess of love Aphrodite tattoo on her arm, and the word “Love” on the inside of her finger.