Ariana Grande has been a busy little bee on the tattoo front the past couple of months, adding two small, discreet tattoos to her ever-growing collection of ink, including a “hi” tattoo on her toe, and a small heart outline tattoo on her ring finger. Just like all of Ariana Grande’s tattoos, these two new pieces hold an important meaning for the singer, who now has eight tattoos and counting!

The first of Ariana Grande’s two latest tattoos was revealed at the singer’s Paris show on The Honeymoon Tour in May 2015, and features a small outline of a heart inked in black on the ring finger of her right hand. Ariana’s heart tattoo is nearly identical to the very first tattoo she ever got, a tiny heart outline on the second toe of her right foot, which was inked as a tribute to her debut album Yours Truly and single “Tattooed Heart.” Ariana’s finger tattoo is also similar to the heart tattoos both Miley Cyrus and Cara Delevingne have inked on their fingers.

Ariana Grande’s heart finger tattoo was revealed just after she and rapper Big Sean called it quits in April 2015, a highly-publicized breakup that the singer surprised everyone by saying “wasn’t that hard for me.” During an interview with Scream Queens creator Ryan Murphy, Ariana said offered some pretty sound breakup advice, saying, “It’s hard. Good luck. You’ll be fine. You don’t need anyone. It’s nice to have someone that makes you happy, but it’s nice to be happy on your own as well.” Perhaps Ariana Grande’s heart tattoo was meant as a nod to her belief that she doesn’t need a boyfriend to make her happy. 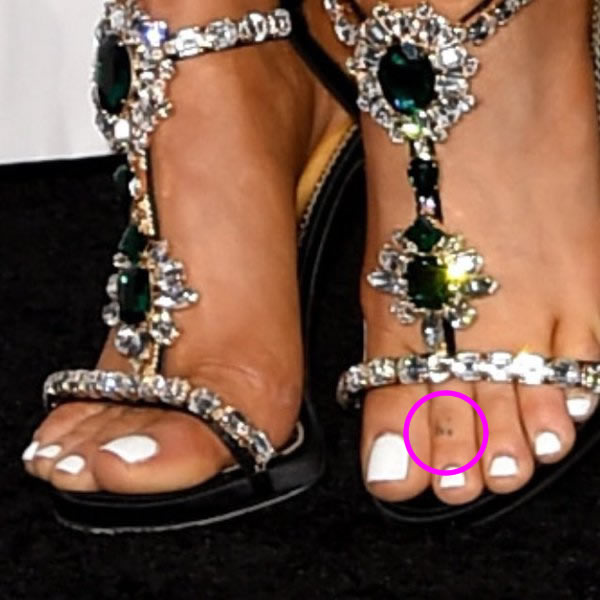 Another of Ariana Grande’s new tattoos is a nearly invisible tat featuring the word “hi” inked in lowercase letters on the second toe of her left foot, in the same spot as the tiny heart outline tattoo on her other foot. Ariana and rumored boyfriend Ricky Alvarez talked about her new tattoo on the pop star’s Snapchat story in June 2015, and while they both joked about the “hi” ink, you couldn’t actually see the tattoo itself. It wasn’t until September 2015, when Ariana attended the MTV American Music Awards in bejeweled open-toed shoes that we finally caught a glimpse of her tiny “hi” toe tattoo.

As for the inspiration behind her “hi” tattoo, Ariana has yet to reveal the significance behind the discreet ink, but being that Ricky Alvarez is portrayed as a bit of a tattoo addict himself, it’s possible that he and Ariana went under the needle together for matching “hi” tattoos. Stay tuned to find out!