Talk about being in the right place at the right time. According to a recent tweet from Iggy Azalea, if the singer hadn’t walked in in the middle of the tattoo session that resulted in fiancé Nick Young’s “Born Rebel” back tattoo, he would have ended up with a completely different, and extremely embarrassing, piece emblazoned across his back. It all began with Nick Young and Iggy Azalea getting in a pretend fight on Twitter, and in response to Nick Young calling Iggy “Becky” in a tweet, a name she apparently hates, the rapper decided to share an embarrassing story about how Young is a terrible speller and almost ended up with an incorrect spelling of “Born Rebel” on his back.

The whole exchange between the two took place on April 27, and began with Young writing “I love my Becky but she be tripping lol.” Iggy responded with “Reble. Don’t make me do it,” and then decided to just come right out with the whole story: “Guys, I wanna let you know. Nick can’t spell and if it wasn’t for the LOVE I have for him. He would have “BORN REBLE” tatted across his back. I came in half way thru his tattoo and noticed “BORN REBEL” looked different to the way I remember it.” Iggy then shared a photo of Nick Young’s back tattoo in progress and, sure enough, the second half of the stencil for the giant back tat is misspelled as “REBLE.” 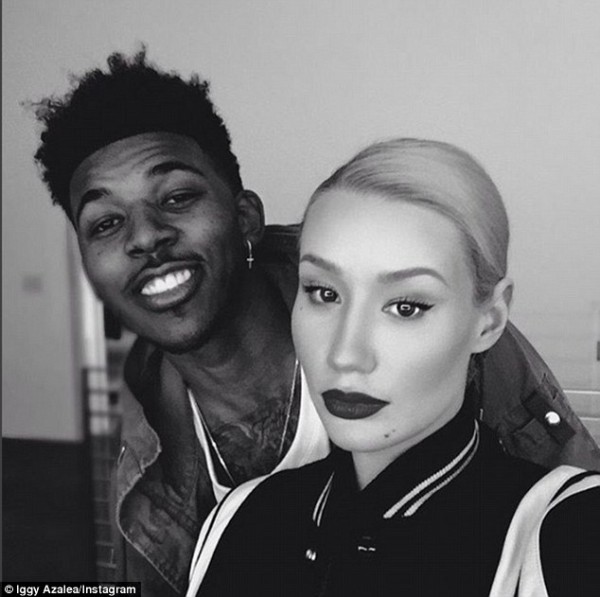 Nick Young isn’t the only celebrity who has gone under the needle for a tattoo that ended up being misspelled. There are plenty of A-listers out there who have covered up tattoos with spelling errors, and plenty of others who are still rocking the incorrect ink. David Beckham, for example, got a Sanskrit tattoo on his forearm that was meant to say “Victoria,” but actually reads “Vihctoria.” He decided to embrace the mistake and keep the tattoo as is. Then there’s Liam Hemsworth, who got a matching Teddy Roosevelt-inspired tattoo with then-fiancée Miley Cyrus that reads, “if he fails, at least [he] fails while daring greatly,” with a missing [he]. He’s holding on to that one too.

And the list doesn’t end there. Hayden Panettiere has a misspelled Italian tattoo on her ribcage meant to translate to “live without regrets,” and Twilight’s Ashley Greene has the phrase “lifes a dance” tattooed on her foot, without the appropriate apostrophe in place. And then there’s Britney Spears, who famously went under the needle for a Chinese symbol tattoo that was supposed to mean “mysterious,” but which actually translated to “strange.” So, there you have it, folks. The moral of the story here is, always use spell check and never go under the needle for a permanent textual tattoo without running it past someone first, preferably someone who knows how to spell, i.e. NOT Nick Young.