Remember just last week when Justin Bieber said he was “done with tattoos for a while” and that he was “where he wanted to be” with his ink? Well, apparently ten or so days was enough of a break, because Justin has added another new tattoo to his collection this weekend, this time inking the word “Patience” on the side of his neck. Although the Biebs himself hasn’t uploaded a photo of the new ink on his tattoo-ridden Instagram page (yet), Justin’s tattoo was posted online on April 5th courtesy of Ink City Tattoos in Florida. The very first glimpse of Justin’s neck tattoo came on April 3 though, while the pop star was in Miami celebrating the 18th birthday of friend, fellow singer and Bieber-look-alike Austin Mahone. Either that or he was there desperately trying to get his drunk driving charges dropped. Either way.

Rumors of a collaboration with You-Tube-sensation-turned-pop-star Austin Mahone began circulating after the Biebs shared an Instagram pic of the two in the studio on April 2, along with the caption “New music #YMCMB.” Two days later, the new besties were spotted partying it up in Miami for Austin’s 18th birthday, and somewhere in there Justin visited Ink City Tattoos for a new neck tattoo. Justin Bieber’s tattoo is inked on the right side of his neck, just below his ear, and reads “Patience” written vertically in a black Gothic-type font. Prior to adding more than a dozen new tats to his right sleeve in mid-March, Justin also got “Love” and “Forgive” tattoos on his arm and waist, and, while we’re not entirely thrilled with the location of this new neck tat, at least Justin Bieber’s tattoos follow a similar theme. 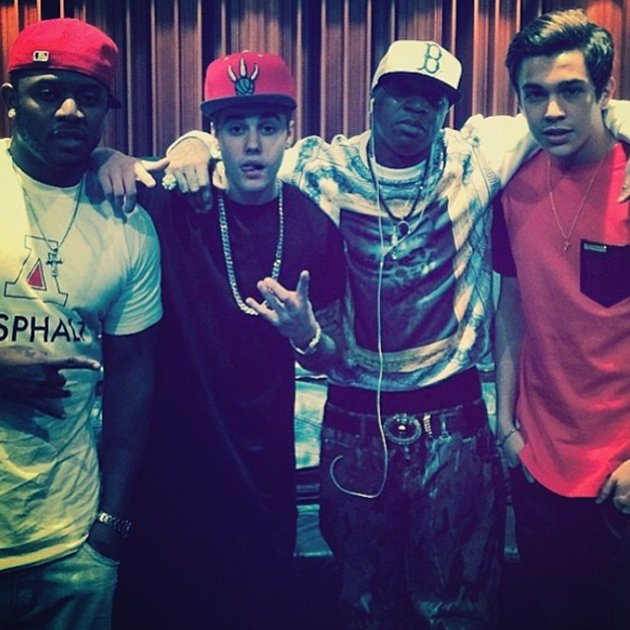 It’s no secret that Justin is a devout Christian, and much of his ink so far has been inspired by the 20-year-old’s deep-seated religious beliefs. For example, after he commissioned Keith “Bang Bang” McCurdy to ink his “Forgive” hip tattoo in February 2014, he texted the tattoo artist and explained: “Forgiveness is powerful, forgive as Jesus died on the cross to forgive our sins.” Like forgiveness and love, patience is another virtue that obviously means enough to the Biebs to have it permanently inked on his body, especially when it comes to a certain brunette beauty who is finally back in his life again. Perhaps Justin’s neck tattoo is a reminder to himself that Selena, his “elegant princess,” is worth all the “patience” in the world.

Although we’re not surprised that Justin Bieber got another tattoo (duh, he’ll be covered in them before we know it), we are sort of surprised that he opted for yet another neck tattoo after getting a sort of girly treble clef tattoo inked on his neck in January. Hmm…sounds like Justin may have been pulling our leg back in 2012, when he said he would never opt for “crazy” neck tattoos like Chris Brown. “I definitely see myself getting more [tattoos] in the future but slowly but surely,” Justin said back when he only had about seven tattoos to his current 45+. “I’m not going to go too crazy right away and get something on my neck or anything like that!” So Justin, now that you’ve broken your own rule with this new “Patience” neck tattoo, what’s next??