When Tyga got a tattoo of Kylie Jenner’s name on his arm, he broke the cardinal rule of blossoming relationships – NEVER, under any circumstances, get a tattoo of the other person’s name inked on your body – and now that Kylie and Tyga have officially split, we’re wondering if the rapper will cover up the relatively new ink with another design?? According to TMZ, Tyga and Kylie’s breakup, which took place last week just after Kylie returned from Australia, was “sudden and nasty,” and was caused by “something Tyga did.” We’re betting Kylie is thanking her lucky stars at the moment that she never got a tattoo of Tyga’s name inked on her body!

Tyga’s “Kylie” relationship tattoo was inked back in April, when Kylie was still underage and the two had yet to officially acknowledge their relationship, even though we all pretty much knew they were a couple. Tyga kind of blew that discretion out of the water though, when he got Kylie’s name inked in a prominent location on the inside of his right arm, and Kylie seemingly returned the favor when she got a tiny red heart outline tattoo on her arm earlier this month. Now, Tyga and Kylie have called it quits, and, according to sources, Kylie “was upset and had harsh words [to say] about Tyga.” 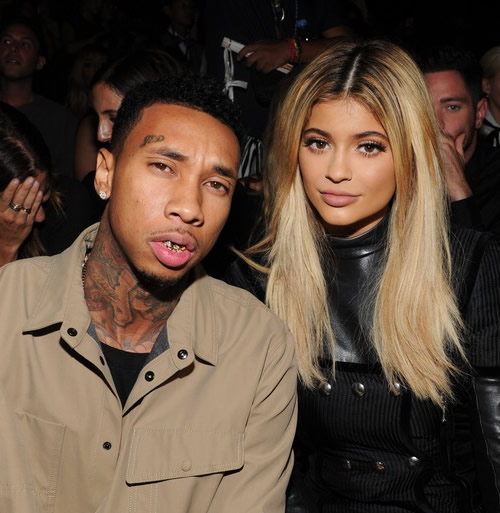 The Jenner/Kardashian clan doesn’t have much success when it comes to relationship tattoos, so it was understandable that Kris Jenner was less than thrilled when she found out Tyga had gotten a tattoo of her daughter’s name, who was only 17 at the time. After all, Khloe Kardashian still rocks an “L.O.” hand tattoo tribute to estranged husband Lamar Odom, and the tattoo Rob Kardashian got in honor of ex Adrienne Bailon is still very present on his left ribcage. So now that Tyga and Kylie are officially over, do you think Tyga will cover up his “Kylie” arm tattoo? And if so, with what new design??