Miley Cyrus posted an adorable photo of her and her Shetland sheepdog Emu last week, and while most people were distracted by how oddly normal the singer looked laying in the grass with her pup, we were actually thrilled to finally get a clear look at the red “OKIE” tattoo on her arm. Miley’s tattoo is inked on the outside of her right arm, just above the tat of two black crossed arrows, which the pop star had done in 2013. Miley’s “OKIE” tattoo was apparently inked sometime in September 2015, around the same time she got her “KATZ” friendship tattoo for gal pal Katy Weaver, and we actually spotted the ink way back then, but couldn’t make out what the tattoo said in the grainy photos. Now that we know Miley’s arm tattoo says “OKIE,” you’re probably wondering what the heck it means.

Our best guess is that Miley Cyrus’ “OKIE” tattoo is a tribute to Oklahoma City, the hometown of one of her best friends, Flaming Lips frontman Wayne Coyne, who was a key collaborator on the pop star’s fifth studio album Miley Cyrus & Her Dead Petz, inspired by the tragic death of her Alaskan Klee Kai, Floyd. It’s likely the singers worked on the album at Coyne’s Oklahoma recording studio, and it’s possible Miley got the “OKIE” ink to commemorate their work together. Miley Cyrus and Wayne Coyne have an interesting relationship to say the least, but it’s purely platonic. “He’s everything in the world – you can’t even define us,” Miley said about Wayne in an interview with The New York Times in August 2015, just one month before getting her “OKIE” tat. “I am 100 percent in love with Wayne, and Wayne is in love with me, but it’s nothing sexual in any way. That would be the grossest.” 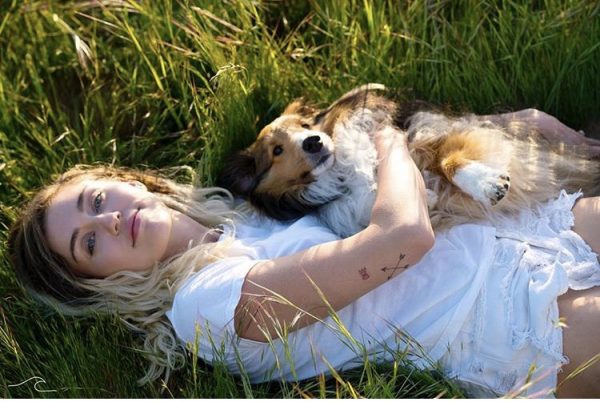 Okay, so Miley and Wayne are the best of friends, and what that typically means to Miley Cyrus is that they get tattoos together and in honor of one another. To date, Miley has at least four matching tattoos with Wayne, including a tiny image of a tooth, a “Leetle” tattoo, and a miniature version of the giant pink robot featured in the album artwork for The Flaming Lips’ 2002 album Yoshimi Battles the Pink Robots, all inked on her arm, plus a portrait tattoo of Floyd on her ribcage. Miley also has a “Love Yer Brain” tattoo inspired by the title track off The Flaming Lips’ 1987 album Oh My Gawd, and a bizarre “sad kitty” tattoo to the inside of her lower lip, which was inked inside an Oklahoma recording studio with Wayne in 2014. Add this new “OKIE” tat to the list, and Miley and Wayne are the most inked-up besties we know.

A special thanks to PST fan Jack Simcox for help in discovering this tat!