Following in the footsteps of Rihanna and Justin Bieber, British singer and songwriter Rita Ora added a one-of-a-kind tattoo to the body of celebrity tattoo artist, Keith “Bang Bang” McCurdy, but only after receiving a tattoo of her own of course! The British beauty’s new tattoo features a relatively large dove in flight, which she had inked in black and white on the back of her neck/shoulder area in May 2013. After getting inked, the pop star turned the needle on Bang Bang and added a similar dove tattoo with “Rita” on it’s wing to the tattoo artist’s impressive collection of tattoos done (illegally) by celebrities he has inked over the years. Rita revealed her’s and Bang Bang’s new dove tattoos on Instagram on May 7, 2013, along with the caption, “His and hers! HA look at the difference…It’s the once in a lifetime Rita Ora tattoo HA!”

It’s pretty much common knowledge that Lower East Side tattoo shop’s Bang Bang likes to get inked by his celebrity clients, so that may be one reason why Rita chose that particular tattoo artist to ink her dove neck tattoo. Rihanna previously inked an umbrella on Bang Bang’s leg, Chris Brown inked a cartoon face and Justin Bieber tattooed Bang Bang with a muscular mouse and the word “Swaggy.” Unfortunately for the Biebs, his foray into the tattoo artist world landed him a $2,000 fine for tattooing without a license, which is illegal in New York state. Still, it’s interesting that Rita Ora chose Bang Bang to ink her new dove tattoo, considering the 22-year-old has repeatedly expressed her frustration about being compared to the queen of tattoos, Rihanna, and Bang Bang is RiRi’s favorite tattoo artist. 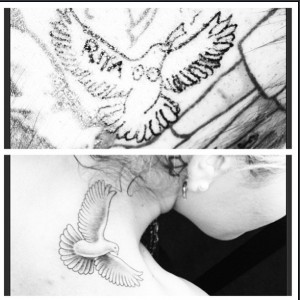 Among the tattoos Rita has that are extremely similar to Rihanna’s tattoos are: her best friend’s birthday inked on her arm, just like RiRi’s shoulder tat of Melissa Forde’s birthday; the words “Hope,” “Love,” and “Promise” inked on her fingers, just like Rihanna’s “Love” and “Shh…” finger tattoos; the Aphrodite Greek goddess of love tattoo Rita has inked on her arm, just like Rihanna’s Greek goddess Isis tattoo on her chest; and a variety of quotes and sayings Rita has inked in foreign languages. Rita Ora even has a Sagittarius Zodiac sign inked behind her ear, in the EXACT same spot as RiRi’s Pisces sign tattoo. Rita Ora may be tired of being compared to Rihanna because of her impressive tattoo collection, but the similarities between the pop stars’ tattoos are really kind of amazing (and probably not a coincidence). She even kind of looks like Rihanna…