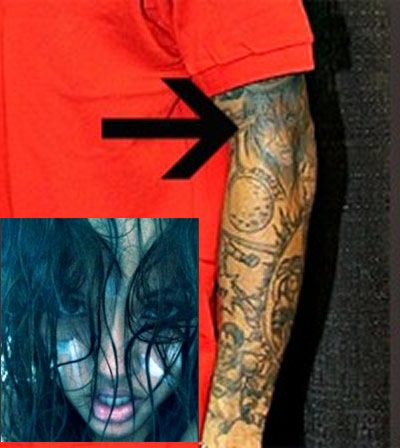 Just when we really started thinking Chris Brown and Rihanna might be getting back together, he goes and gets a tattoo of current girlfriend Karreuche Tran inked on his arm and throws us all off track again. Three years after pleading guilty to assaulting then-girlfriend, Rihanna, Breezy’s recent interactions with the pop queen have spurred rumors about their potential reconciliation. However, the controversial singer effectively squashed these rumors by getting Miss Tran’s face inked on his arm, nestled among his dozens of other sleeve tattoos. If it’s written in ink, it must be true, right??

New Sleeve Tattoo of His Girlfriend

If you look really closely at pictures of Chris Brown’s tattoos, you can see a somewhat creepy face peering out from behind all of his other ink. That’s it, near his left elbow, beneath all that stringy hair that is way too reminiscent of “The Ring,” is Karrueche Tran’s face. Breezy’s arm tattoo features a replica of one of Karrueche’s photo shoots, in which she looks like a “warrior,” according to Breezy. She’s pretty and all, but the image of her decked out in war paint and tousled wet hair just doesn’t seem to translate into a tattoo. But you gotta give Chris Brown credit for dedicating a spot on his tatted up arms for what appears to be the love of his life…we’re sure his girlfriend isn’t complaining!

The whole world thought Chris Brown and Rihanna were going to last when, back in 2009, the two got matching tattoos, one inked on their necks and one on their hands. Chris Brown’s neck tattoo features three stars of different sizes inked behind his right ear, and his hand tattoo is inked in the traditional design of the Maori people of New Zealand. Now having matching stars and tribal tats is all well and good, but Breezy never got Rihanna’s face inked on his body, did he? And he can’t exactly pass Karreuche Tran’s face off as something else if the two decide to call it quits. So Chris Browns sleeve tattoo must mean the singer/actor and model are pretty darn serious! 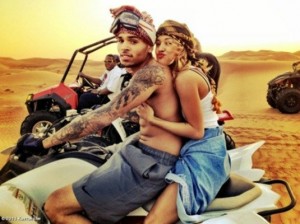 Breezy’s arm tattoo is one of his most recent pieces of body art, and he doesn’t seem to be the least bit interested in stopping anytime soon. With two full arm sleeves, a large chest piece and tattoos on his hands, leg, and neck already, Chris Brown is quickly running out of room on his body for new tattoos. It’s no surprise, since he got his first tattoo at age 13! You have to admit though, it’s nice that Chris Brown dedicated an arm tattoo to his girlfriend and a wrist tattoo to his mom, Joyce. Even though Chris Brown has refused to participate in interviews lately, you can still figure out what’s going on in the R&B star’s life just by looking at Chris Brown’s new tattoos!