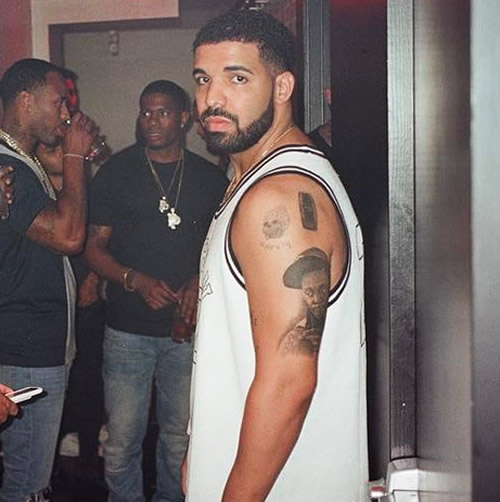 Drake is going through a phase right now where he gets permanent tattoos of the people he is most inspired by, and one of the latest people to show up on Drake’s body in tattoo form is rapper Lil Wayne. That’s right, Drake will forever have a tattoo of Weezy’s face inked on the back of his left arm, just below the Drakkar Noir and “unruly” skull tattoos he was mocked for so extensively on social media. The black and gray portrait tat is based on a 2011 photo shoot Lil Wayne did for Rolling Stone, and was first spotted in late July at Houston Appreciation Weekend, where Drake played host, but word on the street is, the tat was actually done about five months ago while that sneaky little rapper was overseas.

Already inked on Drake’s body are portrait tattoos of the rapper’s mother and father, his uncle, his grandmother, the late singer Aaliyah, and, more recently, two images of British singer-songwriter Sade, so it was really only a matter of time before Drake debuted another new tattoo of someone’s face. And Lil Wayne was an obvious choice; Drake is on the rapper’s label, they’ve been boys for years, and Weezy famously took Drake under his wing when he was first starting out in the rap game, filling the role of mentor and friend. So, it makes sense that Drake would pay tribute to the Lil Wayne with a new tattoo. 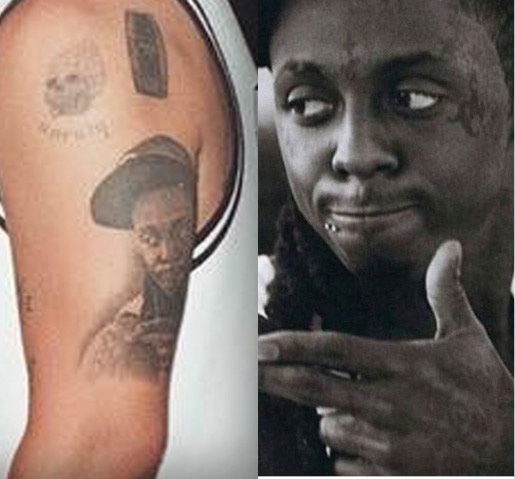 So, the million-dollar question is, how did Lil Wayne react when he caught wind of Drake’s new ink? According to TMZ, the rapper was “beyond floored and honored” to be forever immortalized in a tattoo on Drake’s tricep, which he first saw in a photo the Champagne Papi himself sent when the ink was first completed. Drake may have been intentionally trying to hide the Weezy tat until he was ready to show it off, which would explain why he only posted super close-up images of his Drakkar Noir cologne and pink flower tats on Instagram after having them done.

In addition to portrait tattoo tributes to some of his favorite people, Drake has several other tats dedicated to people and places he loves or is inspired by, including a camouflage shark tat he got to match Rihanna’s, the “unruly” skull tattoo on his arm honoring Popcaan, a “BBK” tattoo tribute to UK rapper Skepta, and several tats honoring his hometown of Toronto, Canada. He also told Celine Dion back in May that he planned to get a tattoo of her portrait, so there’s obviously no stopping him! 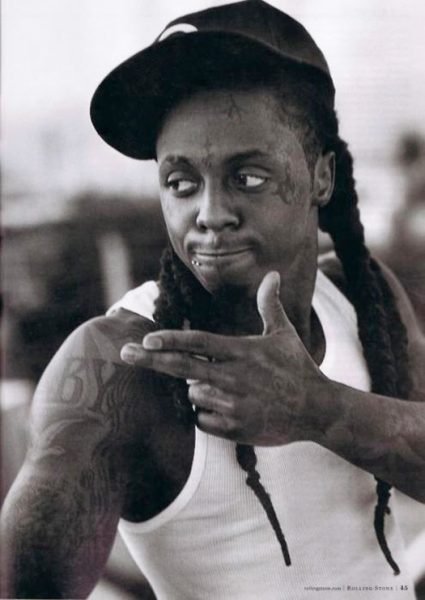