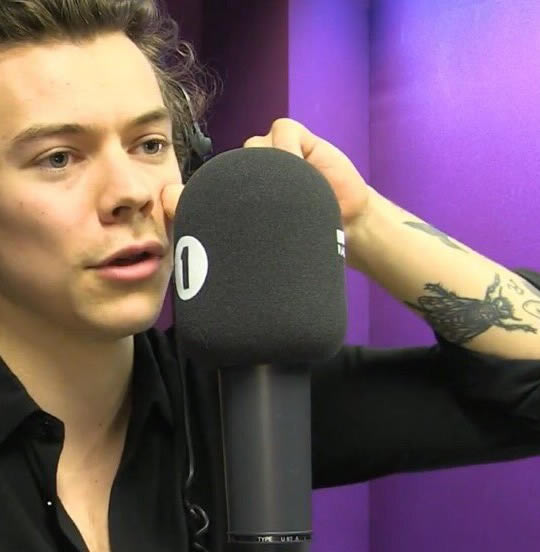 After what was beginning to seem like a tattoo drought that would never end, where we saw no new Harry Styles tattoos for months, the inked-up pop star has been on a bit of a tattoo spree recently, debuting several new pieces within weeks of one another, including a tiny tattoo of the letter “R,” and tattoos of the names “Jackson” and “Arlo,” all inked on his left arm. And now Harry Styles has another new tattoo on that same arm, but the design of this latest piece has us all scratching our heads. It’s a tattoo of a giant insect, that’s for sure, but there’s an ongoing debate about what kind of insect it is.

Photos of Harry Styles’ newest tattoo cropped up online earlier this month, but it wasn’t until the singer sat down for an interview with BBC Radio on April 7, that we really got a good look at the ink. The pop star’s new tattoo of the giant insect is inked in black on the inside of his left forearm, in between his mermaid and Bible tattoos, and on the same arm as his new “R” initial, “Jackson” and “Arlo” pieces. As for the design of the arm tattoo, there has been quite the debate on Twitter about what kind of insect Harry’s tattoo features, with some fans believing it’s a fly, and others insisting that it looks more like a bee.

Bees have become a popular tattoo design in recent years, and they can represent a variety of different things, including loyalty, hard work, sacrifice, unity and family, so it’s possible one of these themes is what Harry was going for with his new insect tattoo. Fly tattoos, on the other hand, can signify upcoming change, and some people believe a fly tattoo will actually protect them from evil. Whatever the meaning behind Harry Styles’ new insect arm tattoo, and whether the image is a bee or a fly, the ink goes perfectly with the giant moth/butterfly tattoo he had inked on his abdomen back in 2013. Next thing you know, he’ll be sporting beetle, mosquito and cricket tattoos to carry on the trend.

A special thanks to PST fan Katja Demmel for help in discovering this tat!