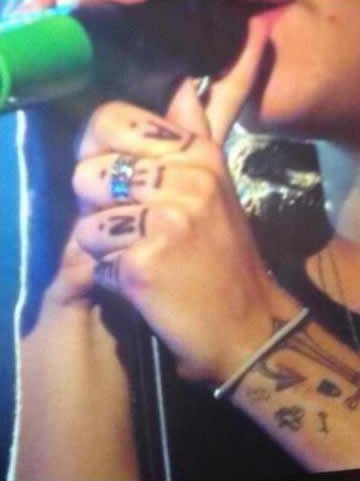 **Update: Sorry folks, turns out Harry Styles’ “ANNE” tattoo on his fingers was just a fake done in Sharpie. Perhaps he was trying out a new design before fully committing and going under the needle though. We’ll find out before long!

All eyes were on the guy who proposed to his girlfriend during One Direction’s gig in Atlanta this week, but our eyes were on Harry Styles, who very sneakily debuted a brand new tattoo across his fingers reading “Anne.” Apparently, Harry had been planning to bring a couple onstage so the guy, Bradley, could propose in front of the whole crowd, but Bradley must have been a little nervous, because he quickly got down on one knee and popped the question before Harry could act. “Come on bro – I was going to bring you onstage…you ruined it!” Harry joked with Bradley…after his girlfriend said yes, of course. “Patience is a virtue!”

It’s fitting that love was in the air during this One Direction concert, because Harry Styles used the Atlanta show as an opportunity to show off his latest tattoo, which is obviously a tribute to the number one love in his life – his mother. Harry Styles’ tattoo is inked across the four knuckles of his left hand and reads A-N-N-E in black capital letters, one on each finger. Each letter also has a straight line above it and a small dot below it, which could have a particular meaning, but could also just be for design purposes. We had to admit, we think it’s pretty darn adorable that Harry has gone to such great lengths to show how much he loves his mom, Anne Cox!

So, we all know that Harry Styles is covered in tattoos, and this certainly isn’t the first time the pop star has gotten some ink dedicated to his beloved mother. Harry also sports a small “A” tattoo on his left shoulder that represents the first letter of his mom’s name, an ever smaller capital “A” tattoo in the elbow crook of his left arm, and he also has another tiny tattoo above his left collarbone that reads “1967,” which is the year his mother was born. Even as Harry gets older and more mature, and ultimately becomes more successful in the music industry, he still knows that family comes first and that his mom will always represent his home. For that, we say “awesome tattoo Harry Styles!”