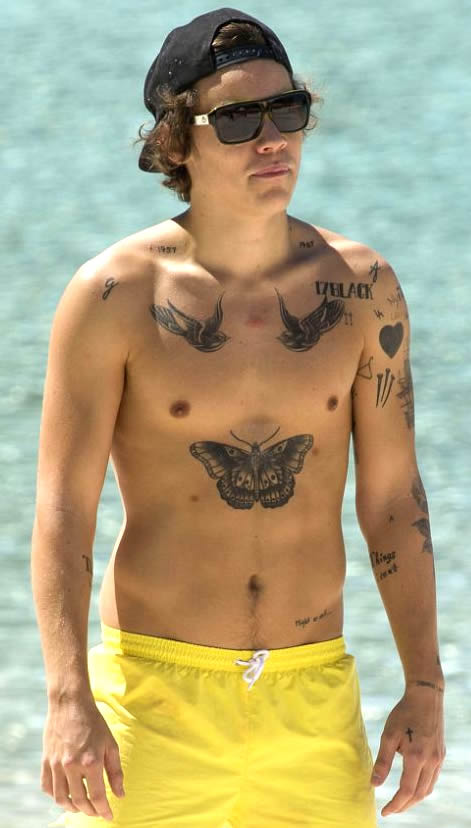 With all the excitement surrounding Harry Styles’ cool new skeleton tattoo on his arm, everyone nearly missed the two other new tats the singer secretly debuted at the same time – the years 1957 and 1967 inked on his collarbones. Harry’s new tattoos were first revealed last week, while One Direction had some fun in the sun during a trip to Queensland, Australia, but the ink remained a bit of a mystery…until now. Harry still hasn’t spoken in public about the new ink, but some sources have hinted that the dates represent the years Harry’s two “best friends” were born. Harry’s mother, Anne Cox, was born in 1967, so we’re thinking that 1957 probably marks the birth year of Harry’s dad, Des Styles. If you’re following our logic, this means that Harry’s “best friends” are his parents. Aww!!

Harry’s small 1957 tat is inked in black on his right collarbone, and the 1967 tat is also inked in black in the same spot on his left collarbone. The Harry Styles’ tattoos are located right near the “g” tattoo Harry sports on his right shoulder as a tribute to his older sister Gemma, and the capital “A” tat located in the same spot on his left shoulder, which was inked in honor of his mother, Anne. With tattoos inspired by both his mom and sister on his shoulders (and on other parts of his body as well), it makes sense that Harry would add a little something for his dad nearby – a tattoo of his birth year.

We know that Harry Styles is all about family, and, even though the singer’s parents divorced when he was seven and he went to live with his mother and sister after that, Harry has maintained a good relationship with his father. When he got the giant ship tattoo on his left arm, his tattoo artist Freddy Negrete said, “He wanted a realistic looking English ship, because he misses home and needs to remind himself that he’s homeward bound.” In addition to his “g” and “A” shoulder tattoos, Harry Styles also has his sister’s name “Gemma” inked in Hebrew and an iced gem cookie, which was apparently his sister’s nickname as a child, on his left arm. Now, with two new tattoo tributes to his parents, there’s no denying that Harry Styles is a family man!