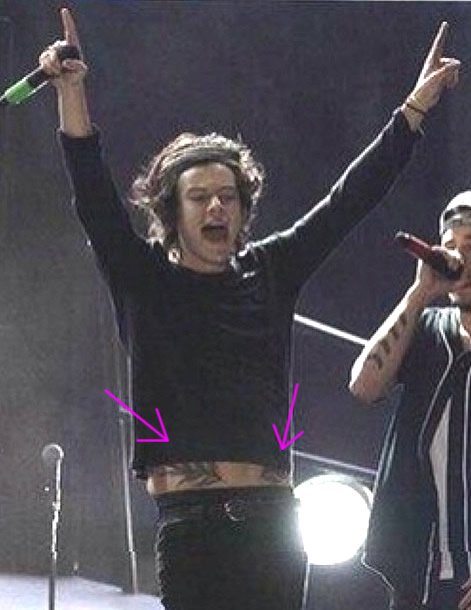 Harry Styles delighted his adoring fans during a performance in Colombia this week, but the singer’s vocal prowess wasn’t the only thing the die-hard One Direction folks were psyched about. During a particularly intense moment on stage with bandmate Liam Payne, Harry lifted up his arms and showed off some skin on his stomach, revealing a brand new pair of hip tattoos in the process. That’s right, Harry Styles’ tattoo of the butterfly on his chest now has some company down south – two large fern leaf tattoos inked on each of the pop star’s hips.

One Direction is currently enjoying the Bogota leg of its Where We Are world tour, and despite the band’s hectic schedule, it seems Harry set aside some time to go under the needle…yet again. Okay, so Harry Styles’ new tattoo isn’t a huge surprise, since we’re pretty sure as long as he has empty space on his skin he will continue to find new and interesting ways to express himself with ink. The real question is, what is the meaning behind Harry’s hip tats?

In West Africa, the Fern or “AYA” is a symbol of resourcefulness and endurance, because the plant can grow under difficult conditions, so it follows that someone who bares this mark would be considered to have endured an abundance of challenges and overcome difficult obstacles in their life. The Celtic meaning of a fern tattoo is also strength and endurance, and this makes perfect sense for Harry, because we all know how incredibly hard it can be to be an international superstar and all-around heartthrob. It’s possible though, that Harry Styles’ tattoos of the ferns represent the journey he took to get where he is today, or the strength and endurance it takes to perform in front of thousands of fans several days a week while on tour, ’cause that can’t be easy. 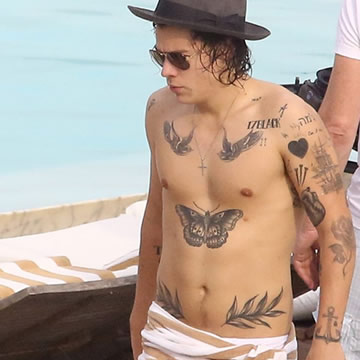 Many people may not be aware of this, but this isn’t the first time Harry Styles has gotten a fern tattoo. Back in late 2013, we caught a glimpse of a tiny new tattoo on Harry’s left bicep featuring a New Zealand silver fern, which the singer likely had done in memory of One Direction’s Take Me Home tour stop in New Zealand. Is it possible that Harry is so obsessed with New Zealand that he decided to get yet another (this time gigantic) fern tattoo on his hips? Probably not, but do note that the fern tat on Harry’s left hip actually covers up the small “Might as well…” tattoo the singer had inked in early 2013. Further proof that Harry is making more mature tattoo decisions and covering up the tiny text tats he used to be addicted to. 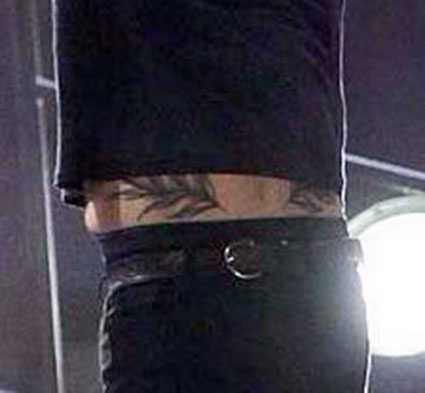 He may have gone under the needle with the sole intention of covering up his silly “Might as well…” hip tattoo, but we have a feeling Harry’s hip tattoos have a deeper meaning, symbolizing strength, endurance, and possibly even passion. Or, as one Twitter follower wrote: “Harry has a bird and a butterfly tattoo… and now he has a leaf tattoo…And here ladies and gentlemen is Harry Styles, the human garden.” The jury’s still out on that one.