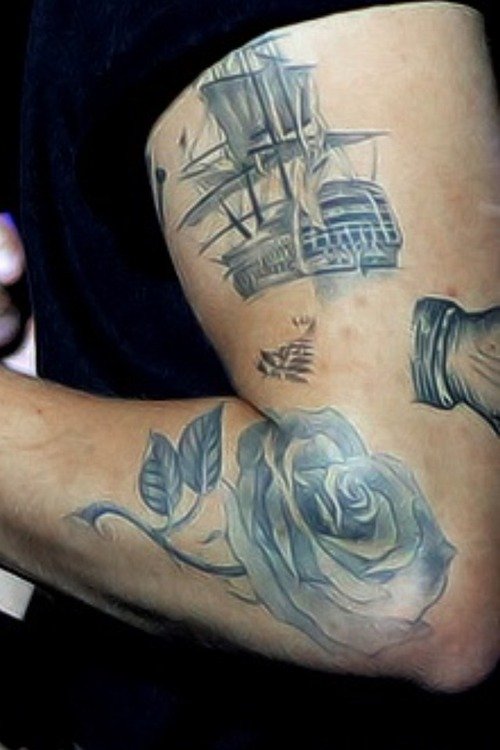 Harry Styles is sporting a relatively new tattoo on his arm, and the previously unknown piece features a small image of what looks like a silver fern. Harry’s fern tattoo (which we originally thought looked like a castle with a flag in the top) is inked in black and white on his left arm, just below the gigantic ship tattoo he had inked in December 2012 with then-girlfriend Taylor Swift by his side. We first noticed Harry Styles’ tattoo in October 2013, but it wasn’t until now that we felt confident saying the arm tattoo is actually a picture of a fern. Read on to learn all about Harry’s fern tattoo on his arm!

When it comes to Harry Styles’ tattoos, the One Direction singer appears to value the idea that the smaller the ink, the better. From small letters to discreet dates, a ton of quotes and a random coat hanger tattoo, Mr. Styles is the king of tiny tats, and we have to admit…we sometimes have a hard time keeping up with them all! With 49 tattoos and counting, there is one piece in particular that Harry has managed to keep pretty low-key – the small fern tat on his arm – but we’ve got photographic proof that the ink exists. So now we just have to figure out what it means to the pop star!

In pictures of Harry back in September – when he added the large rose arm tattoo to his collection – the discreet fern tattoo wasn’t yet inked on his bicep, so the fern was definitely done at some point between September and October 2013. During that time, One Direction was performing in both Australia and New Zealand as part of their Take Me Home tour, so it’s likely that Harry’s fern tattoo was inked in one of those two places. If you remember, Niall, Liam and a couple of their buddies got fake fern tattoos on their wrists while in New Zealand, because the silver fern is a national emblem of New Zealand, used in the country’s coat of arms and on its one dollar coin. Take a look at Harry Styles’ fern tattoo and you’ll see it’s almost identical to Niall’s fake tat!

As far as the tattoo meaning goes…we’re pretty confident that Harry Styles’ tattoo was inked to commemorate the New Zealand leg of One Direction’s Take Me Home tour, much like Harry’s arm tattoos reading “LA,” “NY” and “LDN” are tributes to other places the pop star holds close to his heart. Similarly, Zayn Malik’s tattoo of a New Zealand fantail on the back of his neck was inked while the band was performing in New Zealand for their Up All Night tour. It’s a popular practice these days for artists and performers to get tattoo tributes to remind them of important milestones in their music careers – much like Justin Bieber’s “Believe” tattoo on his arm and Lady Gaga’s “ARTPOP” album title arm tattoo.