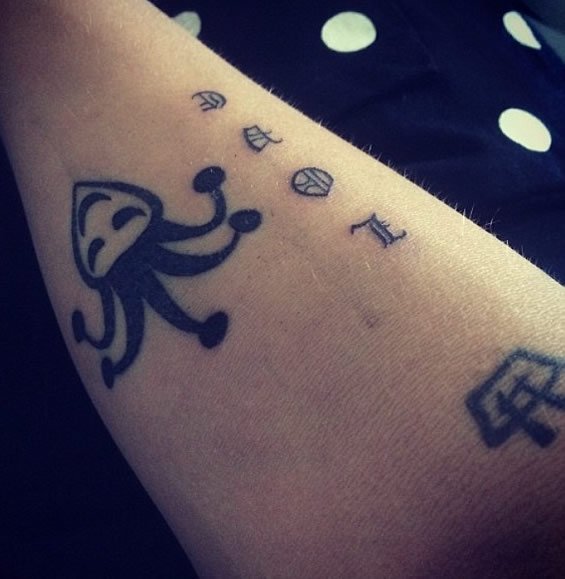 Justin Bieber must have been in a tattoo kind of mood this past weekend, because the inked-up singer revealed a brand-new “LOVE” tattoo on his arm on January 14, 2014, which makes three new tattoos in as many days! We speculated about the meaning behind Justin Bieber’s tattoos of the jester and compass, but the singer straight up spelled out the inspiration behind his latest ink. Rumors have been swirling that Justin and former flame Selena Gomez may be back together, after the Biebs posted a cute couple pic on Instagram last week with the caption “Love the way you look at me,” and this new “LOVE” tattoo on Justin’s forearm seems like a confirmation of that steamy rumor!

Justin Bieber already had a whopping 24 tats before he went tattoo crazy this past weekend, and with the addition of his three new pieces in three days, he now rocks 27 tats scattered across his body, but mostly concentrated on his arms. That’s right; on Saturday, the Biebs took to Instagram to show off a small jester tattoo on his right forearm, followed by his reveal of a large compass tattoo on his left bicep on Sunday, and then an unveiling of his new “LOVE” tattoo on Monday. At this rate, Justin Bieber could be well on his way to Lil Wayne status before the week is out! 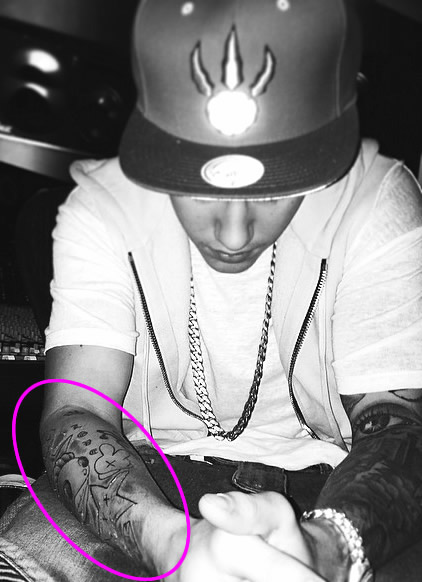 There’s no question in our minds that Justin is addicted to tattoos, much like fellow pop stars Rihanna and Miley Cyrus, but who would have guessed that the singer would start right in on his right arm after just having completed the full sleeve on his left arm? Prior to this new ink, the only tat the Biebs had on his right arm was the tiny Japanese Kanji symbol that stands for music, which is obviously a major influence in the 19-year-old’s life. Apparently, there are a few other things he finds just as important as music though, including love. Justin’s new “LOVE” tattoo is inked vertically in a black old-school Gothic font, next to the black and white jester tat he had inked on the inside of his right forearm two days prior. 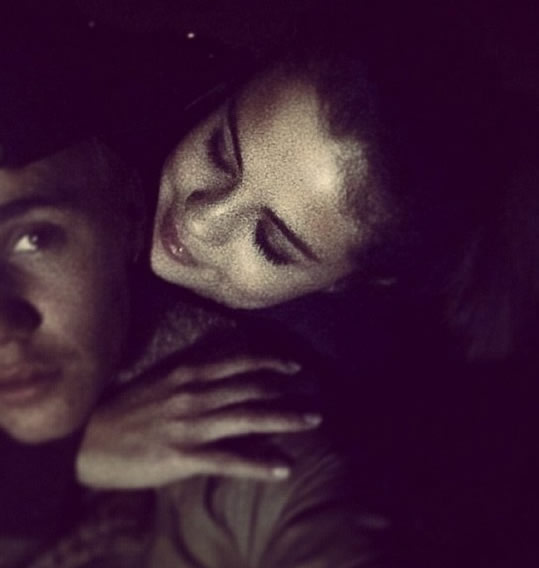 Earlier this month, shortly after a selfie photo was posted on Instagram of Justin and Selena looking cute and cozy together, the two pop stars were spotted cruising on Segways together in Calabasas, California, looking super happy and carefree. The duo also reportedly spent some time at a KOA Kampground in California for a one-night stay with Justin’s family on January 4, and that sounds an awful lot like a reconciliation to us! So what do you all think – are Justin and Selena getting back together? And was Justin’s “LOVE” arm tattoo inspired by their reunion? We can’t wait to find out for sure!