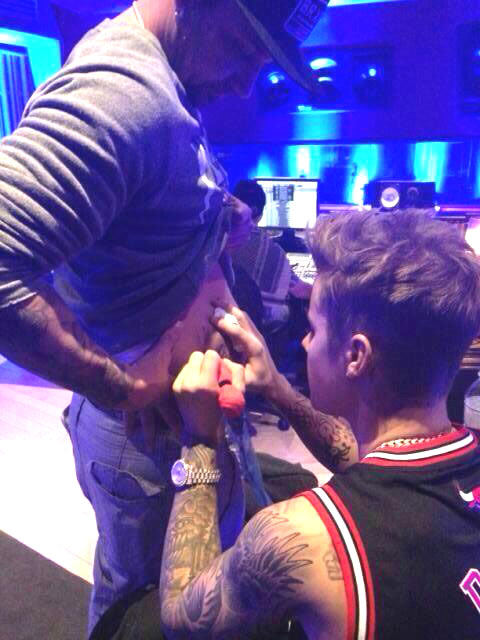 Whether he’s getting matching tattoos with family and friends, or turning the tattoo gun on them and leaving a permanent mark on their skin and lives, Justin Bieber has clearly embraced all aspects of the tattoo culture.

A recent picture posted on Justin’s “Shots of Me” page captioned “Up to no good” (not unlike the Harry Potter book’s marauder password “I solemnly swear I’m up to no good”) shows Bieber’s best friend Ryan Butler, or “Buttsy” as Justin fondly nicknamed him in their boyhood, sporting a larger but identical Jester tattoo by the wrist of his half sleeve. Being the famous little prankster Justin is known to be, it was only a matter of time until he got matching ink with his childhood partner in “crime.” And while we think the little jesters happen to be very fitting for the young duo, we can’t help but wonder what trouble they were up to when that picture was posted. One thing is for sure though – now we all know how Justin worked his musical “magic” on the Beliebers…Justin Bieber is a Wizard. 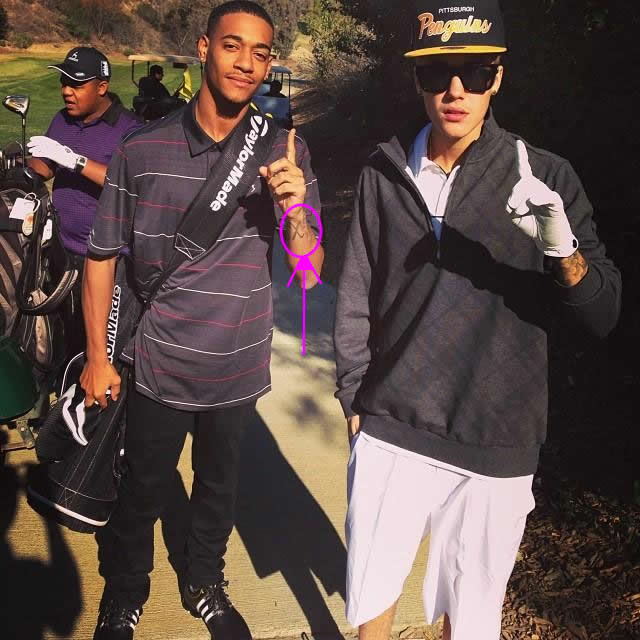 In all seriousness though, getting matching tattoos is a staple in the tattooing culture, and is also something Justin is familiar with. With our well-trained hawk eyes here at Pop Star Tats, we noticed that Justin’s X tattoo on his lower left sleeve matches the same X tattoo his fellow “Crew” member Lil Za sports on his left arm near his wrist. It appears they may have even gotten the tattoo around the same time in the UK, since both of their X tats only showed up in pictures after they were seen hanging out in England (and who could forget when they danced to their ride in onesies like little kids??). Hey, maybe that’s why he’s called Lil Za, because he’s still a little kid at heart with ink on his skin. Perhaps Justin will start going by Lil Bizzle on his next album. Nah, we don’t think so; he’ll always be little Kidrauhl, because his biggest tattoo inspiration is still his daddy, Jeremy Bieber.

In the past, Justin has had several matching tattoos done with his father, from his family’s sixteenth birthday tradition (and our first JB tattoo post), the seagull tattoo he got on his hip that Jeremy also has on his wrist. Then, while on the “My World” tour and only a year after his first tattoo, we wrote a post about the Hebrew script tat that both father and son got on their left ribcage while in Israel. Also, in the extra features of the “Believe” Movie DVD, Jeremy Bieber mentions how he got the Castle tattoo first on his right forearm, and then Justin “stole” the idea and got it on his left forearm. So, it’s no surprise that, with this ink bond the Bieber boys have, Justin has set his sights on other ways to get involved in the tattooing culture…and with his dad right by his side, just like their matching tats.

JB Practices His Tattooing Skills on Others 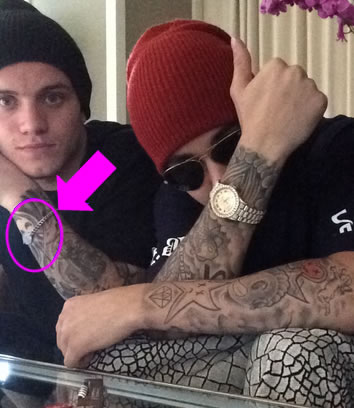 Now, we have mentioned before that the Biebs has talked about opening a tattoo shop with his dad, and he clearly has already found a few opportunities to work on his skills on the side (and chest) with his more-than-willing family and friends. You already know about the time Justin tattooed his “Buff Swaggy Mouse” on tattoo artist Keith “Bang Bang” McCurdy, and though it presented some legality issues, we did notice that he was at least following proper sanitary procedures by wearing rubber gloves.

We all know that doing things the legal and proper way hasn’t been on the top of Justin’s “to do” list as of late. A couple examples of this we can see are from these two images. One shows Justin calmly doing some shading on Khalil’s chest tattoo, and the other picture shows J “Bizzle” tattooing something unknown on his dad’s right hip by his “happy birthday tribute” tattoo. In both of these instances, he doesn’t seem to have anything but a tattoo gun, a paper towel, and his bare hands. Not exactly the most inviting environment for a young aspiring (side job) tattoo artist to show future clientele, especially since his dad didn’t even have a chair to sit down in while getting inked. Though Jeremy “Lord Rauhl” Bieber didn’t seem to mind with his glowing comment “Tatt up!” Which is exactly what both these Bieber men have done, and will certainly continue to do, as long as they have bare skin for an artist, or themselves, to use as a canvas.

Would You Say Yes to a Justin Bieber Original? 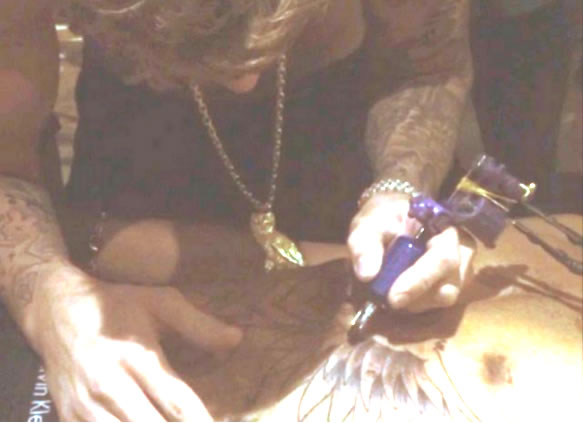 We here at Pop Star Tats would love to hear your thoughts on Justin’s growing involvement in the tattoo culture. Would you get a matching tattoo of one of JB’s? Would you let him turn the tattoo gun on you and trust him to leave a permanent mark on your skin the way he has left his mark on the music industry? We’ve shared our thoughts, so please feel free to share yours!