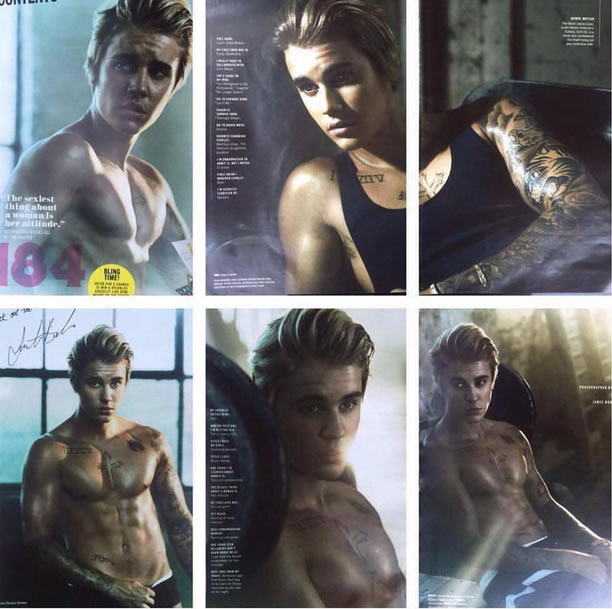 In the September issue of Cosmopolitan magazine, you’ll find an in-depth interview with our favorite bad-boy Justin Bieber, in which the pop star reveals 20 things few people know about him, including his favorite tattoo and the ink he plans to get next! Justin Bieber’s upcoming single “What Do You Mean” has been generating plenty of buzz recently, and this new Cosmo interview coincides with the track’s August 28th premier. Maybe if we’re lucky, Justin will go ahead and get this new tattoo he’s planning as a tribute to his new album!

Among the list of little-known details about Justin Bieber, the 21-year-old revealed that his favorite tattoo is the owl he had inked on his left forearm back in October 2012, as a symbol of wisdom. Apparently Justin knew even back then that his owl tattoo would be his favorite ink, because when he revealed the arm tattoo on Twitter, he wrote, “OWL Symbolizes: Wise, Majestic and Powerful. Best tattoo ever.” So now that we know what Justin Bieber’s favorite tattoo is, are you wondering what his next tat might be? According to Justin himself, it could be – GASP – a tramp stamp on his lower back!

It’s been about a month since we’ve seen a new Justin Bieber tattoo, the most recent being the touching “G” tattoo he had inked on his arm in July, in honor of a little girl named Georgia, who was born with a rare brain disorder called Lissencephaly. The Biebs has apparently been spending a great deal of time in the recording studio, getting ready for the release of his new album in September, and less time under the needle, where we’ve been used to seeing him for the past few years. As much as we love seeing new Justin Bieber tattoos, we are equally as excited to check out the singer’s fourth studio album!

“My music is very awesome, actually,” the singer revealed during an exclusive premier of his new single “What Do You Mean” at the iHeartMedia Music Summit in Burbank, California on August 5. “I’ve been working really hard on it. I’ve been taking my time. I haven’t put out an album in over three years.” It’s hard to believe that it’s been that long since the Biebs has released a new album, what with all the time he’s spent in the news lately, but he’s been trying not to let the bad publicity get him down. “It’s been kinda a rough couple of years,” he said at the iHeartMedia Summit. “I think people want to see me fail. I’ve been working my hardest not to let that happen.”

It’s good to see that Justin Bieber has been trying to keep his head up and do what he loves most – make music – and the singer even went so far as to get an inspirational tattoo in May 2015 that features two script letter L’s. Justin Bieber’s “LL” arm tattoo reportedly means “low, lift,” or, as Justin himself explains it, “Basically, when your head is low, lift it up and you’re never gonna live in shame.” Judging by his new Cosmo interview though, Justin Bieber is far from feeling shameful, and may even be debuting a “tramp stamp” tattoo at some point soon! Stay tuned to get the inside scoop on Justin Bieber’s new tattoos!!

One Response to: Justin Bieber’s Next Tattoo Could Be a “Tramp Stamp,” According to Cosmo Spread