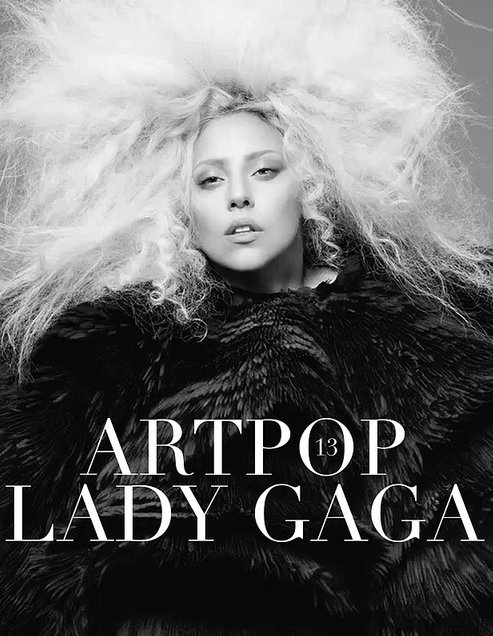 In the midst of a media fervor over her three most recent tattoos – “ARTPOP” on her arm, an anchor on her side and a guardian angel on the back of her head – reports have surfaced that Lady Gaga is recording her upcoming ARTPOP album in her birthday suit. Gaga is pretty darn busy, and she has been recording tracks for her newest album between appearances for her Born This Way Ball tour and other performances. The queen of pop reportedly thinks that recording vocals without her clothes on makes her voice sound better, so we say more power to her!

Lady Gaga got some fresh ink to announce the title of her upcoming ARTPOP album, but it appears as though Lady Gaga is embracing a more natural form of artistic expression while actually recording the album. That’s right, the queen of pop apparently prefers to be in the buff during the recording of her fourth studio album. The controversial singer hasn’t commented on her recording practices herself, but a source reportedly said, “She has been recording vocals while she’s been completely starkers. She thinks it makes her voice sound better.” Judging from the outrageous attire Lady Gaga typically dons for performances, and given that the singer’s Born This Way Ball tour has been keeping her busy and in-costume, with 110 dates across the globe, it’s no wonder Mother Monster prefers to strip down when she’s in the studio.

Although Lady Gaga promised to reveal her upcoming album title to fans in September 2012, she apparently just couldn’t wait that long. In August 2012, the pop star posted a pic of a new tattoo on her LittleMonsters social media site along with the message, “new ink new album.” The tattoo on Lady Gaga’s arm reads “ARTPOP,” which was believed to be the title of her newest album, set to be released in 2013. After confirming that “ARTPOP” was indeed the name of her upcoming album, Gaga posted this message: “make sure when writing about my new album/project ARTPOP that you CAPITALIZE the title.” Turns out, ARTPOP is actually an acronym that stands for Artistic Revolution Through the Potential of Pop. 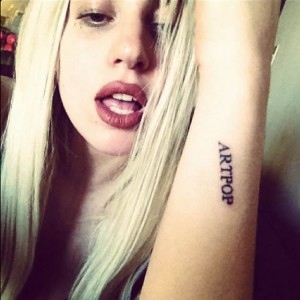 This isn’t the first time the queen of pop has referred to herself/her music/her fans as a “revolution.” Lady Gaga really means to change the world with her music and her message, and her sometimes outrageous but always faithful fans around the world are likely to join right in and help. Around the time that Lady Gaga got her “Little Monsters” tattoo inked on her arm in honor of her fans, the pop star said, “I have become a better artist because of my fans. They are a revolution. They are living proof that you don’t have to conform to anything to change the world.” Obviously, Gaga doesn’t plan to conform to anyone’s expectations of how things should be done…she is recording her album au naturale, after all.

In reference to her upcoming album, Lady Gaga’s boss Vincent Herbert reports that it’s “phenomenal. She’s just always changing things.” Lady Gaga isn’t the only artist that has been so amped about a new album they got a tattoo of it inked on their body though. The young and incredibly successful Justin Bieber released his latest album Believe back in June, and he celebrated the big achievement with a new tattoo on his arm. In releasing his Believe album, Justin Bieber also showed a musical departure from the sound of his previous albums, but we’re guessing he didn’t strip down to record the LP. Then again, if Lady Gaga says recording her album without any clothes on makes her voice sound better, who are we to argue with her?