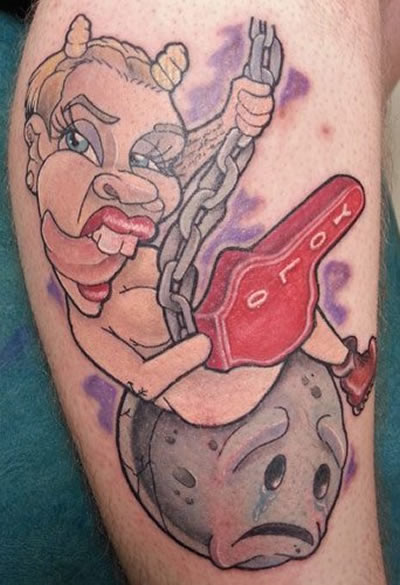 We didn’t think it could get any weirder than Vanilla Ice’s “MILEY CYRU$” tattoos on his feet (which are probably fake, for the record), but another Miley fan proved us wrong this week when he got inked with an even crazier tribute tat to the singer. The tattoo is sort of a combination between Miley’s embarrassing foam-fingered VMA performance and her racy “Wrecking Ball” track, and features a likeness of the pop star in the buff swinging on a crying wrecking ball and wearing a red foam finger that says “YOLO.” To finish off the look, the cartoon version of Miley Cyrus is also sporting those weird pigtails on top of her head, and her insanely long tongue is a-dangling out the side of her mouth. We think Miley Cyrus Carl would disapprove.

Okay, let’s start with the person who is responsible for inking this crazy/amazing fan tattoo. That would be Mr. Scott Howard of The Living Canvas in Buffalo, New York. He posted a pic of the ink on Reddit along with the caption, “Done did this for some poor kid hahaha,” and it instantly went viral. When asked what inspired this devoted (or crazy) Miley Cyrus fan to get the image inked on his body, Howard explained in a comment on Instagram: “There isn’t really much story. I draw all these stupid things and people actually want to get them done. Never stops surprising me.”

There are plenty of amazing things about this guy’s Miley Cyrus tattoo, but we have to say, the very best part is the crying wrecking ball. While the waterworks were probably included because Miley does her fair share of crying during the “Wrecking Ball” music video, we like to think that the wrecking ball is at least slightly embarrassed about what’s going on around him. All in all, the fan tattoo is pretty darn amazing, and we think Miley, who recently debuted her own “Rolling $tone” foot tattoos, would approve.