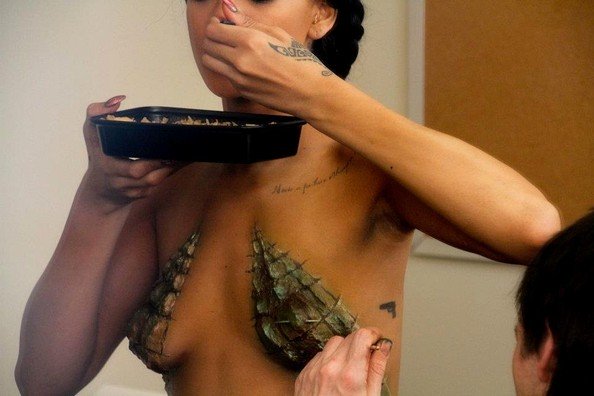 Rihanna took to Facebook recently to share behind-the-scenes pictures of the serious make-up session that transformed her into the sexy reptilian creature you see in her “Where Have You Been” video. In addition to the life-like scales on her body, the music video pics also offer a great glimpse of many of the singer’s tattoos. Check out the pics to see Rihanna’s tattoos and sexy scaly body!

In case you didn’t realize that Rihanna is basically in the buff for her “Where Have You Been” music video, the pop star posted a whole bunch of behind-the-scenes photos online for all to see. Back in May, the pop star’s scaly reptilian video broke a record for the most YouTube views within a 24-hour period, most likely due to her painted-on, barely-there ensemble. And even though you couldn’t quite make out Rihanna’s tattoos and her svelte physique in the dark, murky video, the bright lights of the makeup room sure don’t leave much to the imagination!

With the songstress sporting nothing up top but scaly paint, the music video pics are a great opportunity to check out all Rihanna’s tattoos. RiRi poses for the behind-the-scenes pictures as a makeup artist applies green scales to her breasts, ribs and spine. And thanks to the multiple perspectives in the pics posted by Rihanna, you can see the tats on the superstar’s shoulder, neck, back, chest and side. Checking out the side view, you can see Rihanna’s Roman numeral tattoo on her left shoulder, as well as the rebelle fleur tat on the left side of Rihanna’s neck. With a great view of the life-like scales stretching down her spine, you can also easily make out the stars tattoo that reaches from the back of her neck, down between her shoulder blades. 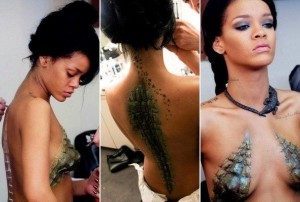 One of the best pics features a front view with a serious-looking RiRi all made up, wearing an alligator necklace around her neck, and offering a glimpse of three of Rihanna’s tats. In addition to her Roman numeral and rebelle fleur tattoos, you can also see Rihanna’s chest tattoo that reads “Never a failure, always a lesson.” RiRi’s “never a failure” tattoo is a tribute to the way the wildly popular singer lives her life: learning from her mistakes instead of living with regrets. In a great pic of the pop star chowing down during a makeup application that must have taken hours, you can also see Rihanna’s tribal hand tattoo and the tiny gun tat on her side, under her armpit.

The pictures of Rihanna’s transformation into a reptilian jungle creature are super sexual, proving that she still has what it takes to be a star. It’s not only her music and hot bod that are keeping RiRi in the spotlight these days though. Rihanna has made headlines numerous times in recent months, as the 24-year-old singer continues to add to her tattoo collection. With a current total of 18 tattoos the superstar definitely has a lot of ink, but she always keeps them classy! All Rihanna’s tattoos mean something important to the Bajan beauty, and when she gives us a sneak peek of her tats with behind-the-scenes pictures (especially when she’s sporting so little clothing), we all win!

One Response to: Behind-the-Scenes Pics Show Rihanna in Scales & Covered in Tats!