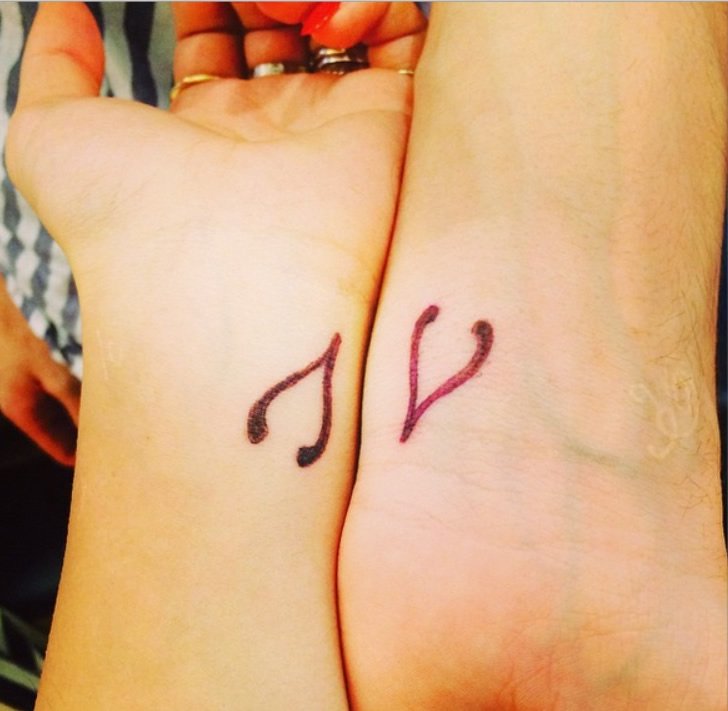 Stop the presses! Rita Ora has apparently been hiding two very cool tattoos that she had done sometime during the past few months, and with a little digging into the pop star’s jam-packed Instagram account, we’ve managed to uncover some photos of her little-seen tattoos for all you Rita Ora fans out there! Are you ready?? …..The two latest additions to Rita’s impressive collection of ink include an adorable wishbone tattoo inked in black on the inside of her left wrist and a small heart outline tattoo inked on her left-hand pinky finger.

One of the first times Rita showed off her small heart finger tattoo was earlier this month, when she posted a black and white Instagram pic of her left hand covering a stack of papers. Rita captioned the photo “Script time. I can’t wait for you all to see what’s coming up next year so many exciting projects!!” Rita Ora fans were psyched to get an update on the pop star’s involvement in the highly-anticipated Fifty Shades of Grey film, but we were more excited about the tattoo Rita inadvertently revealed in the photo. Take a peek at the lower part of the singer’s left-hand pinky finger and you’ll see a discreet outline of a heart inked there.

Rita hasn’t said much, if anything, about her heart pinky tattoo in public, but we’re thinking the tat may have been inked back in October, when Rita was spotted wearing a pair of Mickey Mouse ears and heading into a tattoo parlor with pal Nick Grimshaw on London’s Portobello Road. A picture of Rita looking like she was getting inked was posted online, but the singer has kept the ink under wraps…until now!

In addition to her adorable heart finger tattoo, Rita also recently revealed a cool little wishbone tattoo inked on her wrist, which she apparently had inked back in September.

Rita Ora’s tattoo of the wishbone on her wrist first appeared in an Instagram post on September 20, and in it Rita is holding her wrist next to someone else’s arm who has a matching wishbone tat on their own wrist. The pop star captioned the photo “Wishbone for my backbone @kyledevolle #Tokyo,” referencing Rita’s good friend and stylist Kyle Devolle. Obviously the two are close, and in a recent interview with Stylist Magazine, the singer said, “Luckily my friend Kyle, who’s been my best friend since I was young, loves clothes so he’s the perfect person to help me. Nobody knows me better than him.”

There’s no denying that the majority of Rita Ora’s tattoos refer in some way to the notion of love. In addition to the obvious “love” tat on her finger and “love me” tattoo she has inked on her wrist, Rita also sports a ribcage tattoo reading “Love all, trust a few, do wrong to none,” a hip tattoo reading “All’s fair in love and war,” and a giant tattoo on her bicep of the goddess of love, Aphrodite holding a heart. It’s no surprise then, that two of Rita Ora’s latest tattoos – the small heart tat on her pinky and the wishbone tattoo tribute to bestie Kyle Devolle – also deal with love, albeit in a more discreet way.