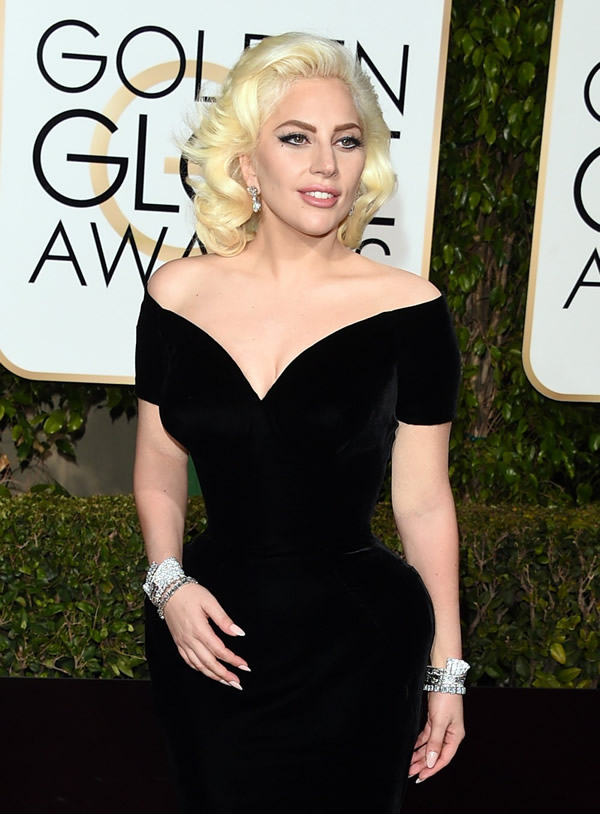 Lady Gaga took home her first acting award at the Golden Globes on Sunday, and being that the majority of us were distracted by her supposed kerfuffle with Leonardo DiCaprio, who was apparently startled by Gaga brushing past him on her way to the stage to accept her award, it took a couple of days for it to dawn on us that Lady Gaga was completely tattoo-free during the awards ceremony! Unlike her appearance at the Emmy Awards last year, where Lady Gaga’s tattoos were on full display, as usual, the singer/actress chose to cover up her extensive ink for the 2016 Golden Globe Awards.

Take a look at photos of Lady Gaga at the Golden Globes, and you’ll notice that the usually very visible tattoos on her shoulder and arms are nonexistent, and not just because the 29-year-old chose a more conservative look than the dress she wore at the Emmy Awards. Missing are Lady Gaga’s heart tattoo with the “Dad” banner, her “Tokyo Love” tattoo, and her tattoo of three daisies, all on her left shoulder. Also missing is Lady Gaga’s tattoo of the trumpet she had inked on her right bicep in honor of Tony Bennett, the mouse tattoo she got inked on the back of her left arm for her sister Natali, and her huge “Little Monsters” and Rilke German tattoos on her left bicep. 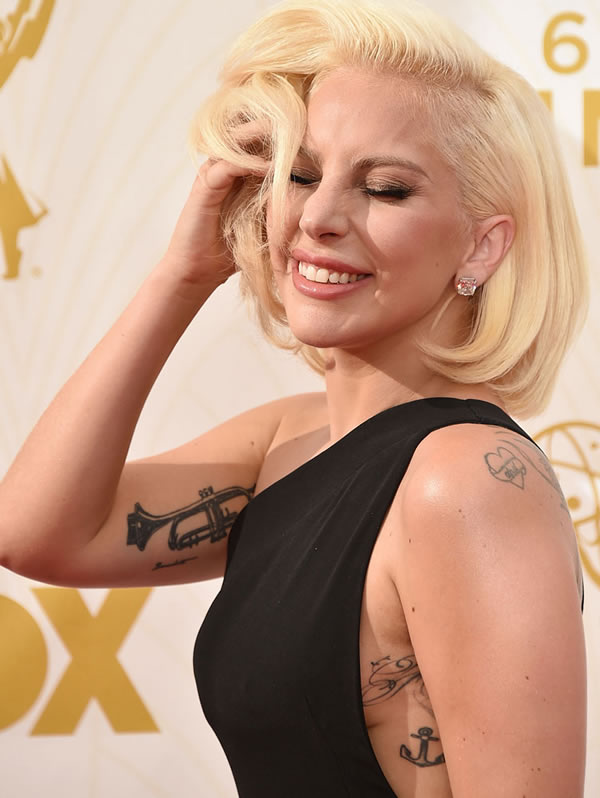 So how exactly did Lady Gaga get rid of her many, many tattoos? She enlisted the help of professional makeup artist Mike Mekash, who worked on the movie Mad Max: Fury Road as well as the television show American Horror Story. Fitting, since Lady Gaga’s Golden Globe win was for her role in American Horror Story: Hotel. According to Mekash, he used an acrylic adhesive-based makeup and skin illustrators to cover up Lady Gaga’s tattoos, which he says, “looked great on the red carpet and on stage when she WON! And for 99% of the press photos.” There were a couple instances, under harsher lighting, where you could see the makeup covering her tats.

As for the why behind her tattoo cover-ups, you’d have to ask Lady Gaga herself. For someone so obviously intent on being unapologetically herself 100% of the time, it’s interesting that she chose such a public platform to show off her new ink-free look. On the other hand, if she’s really trying to break into the movie biz, it makes sense that Lady Gaga would go for a more understated, less in-your-face look for the awards ceremony. It’s even possible that Lady Gaga, who hasn’t debuted a new tattoo in more than a year, is over her ink. Could there be a more permanent tattoo cover-up in Lady Gaga’s future??

For those of you who didn’t notice Mother Monster’s ink-free look at the Golden Globes, check out Lady Gaga’s tattoos in all their glory here!