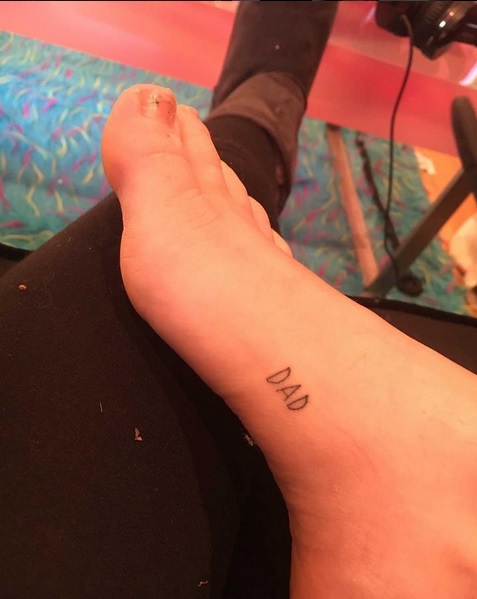 With 50+ tattoos scattered across her body, Miley Cyrus is quickly running out of real estate for new ink, but she still has some space on her foot, and that’s where she put her latest tattoo: a sweet little tribute to her dad, Billy Ray Cyrus. Miley’s new tattoo is inked on the inside of her right foot, near the arch, and includes three simple letters – DAD – done in black ink in what appears to be someone’s handwriting. Obviously, Miley is a big fan of her father, who has supported her throughout her entire life and career, and now she has a permanent tribute to good old Billy Ray on her foot.

Though some of her current tattoo designs are a little strange and seemingly random – she has a marijuana leaf inked on her arm, along with an image of planet Jupiter, and half an avocado – Miley loves getting tattoos dedicated to her friends, loved ones and role models. Some of these tattoos include the name “Elvis” inked in the shape of a heart, a “BIEWTY” tattoo for bestie Cheyne Thomas, and a robot tattoo honoring The Flaming Lips frontman Wayne Coyne. Now Miley has a brand-new tattoo dedicated to one of the most important people in her life – her father.

Last week, Billy Ray Cyrus took to Instagram to show off Miley’s new tattoo, writing “This may be the best tattoo I’ve ever seen @mileycyrus.” Considering the fact that Miley has dozens and dozens of tattoos adorning her body, that’s actually a pretty significant statement coming from Billy Ray. Why she chose her foot for this “DAD” tattoo, we may tattoo never know, but don’t worry, Billy Ray is in good company down there…the pop star also has a tribute to Rolling Stone magazine emblazoned on the bottoms of her feet. No word yet on which tattoo artist is responsible for Miley’s new foot tattoo, but she frequents the shops of Lauren Winzer and Dr. Woo, both of whom have a thing for tiny tats, so they are two likely contenders for this mini foot tat.

In other news, Miley isn’t the only Cyrus to go under the needle recently. Her younger sister, Noah, also got some fresh ink last week, adding a tiny tattoo of a teardrop to her finger to mark her first successful single as an artist, “Make Me (Cry).” Although Noah Cyrus is just getting started with her tattoo collection, if her sister, Miley, and brother, Trace, are any indication, she’ll be covered in ink in no time! In fact, she told MTV in a recent interview, “I think I need to get a horseshoe on my finger with my mom because horses are kind of a [family] thing.” And so, it begins…