Barely one week after debuting the new bear tattoo on his chest and soaring eagle tattoo on his abdomen, Justin Bieber has added ANOTHER new tattoo to his collection – a fierce lion tattoo inked overtop of his heart. Justin Bieber’s new tattoo is located on the left side of his chest, below the small crown tattoo he had inked on his collarbone in 2012, and features an image of a stoic lion done in black and gray, similar to his bear and eagle tattoos. Justin’s new lion tattoo was first revealed on Instagram by the singer himself, and was followed up by another image posted by celebrity tattoo artist Keith “Bang Bang” McCurdy.

On March 20, Justin Bieber took to Instagram to show off some fresh ink he presumably got while in New Zealand, and the two new pieces featured the head of a roaring grizzly bear on the right side of his chest, next to his large cross tat and underneath his Roman numerals tattoo, and a soaring eagle on his abdomen, between his “Purpose” and “Son of God” tats. The fact that he left the other side of his chest conspicuously tattoo-free, while covering virtually the whole front of his torso with ink, we had a feeling Justin would be going back under the needle before long, and now he has covered that empty spot on his chest with the head of a stoic-looking lion. 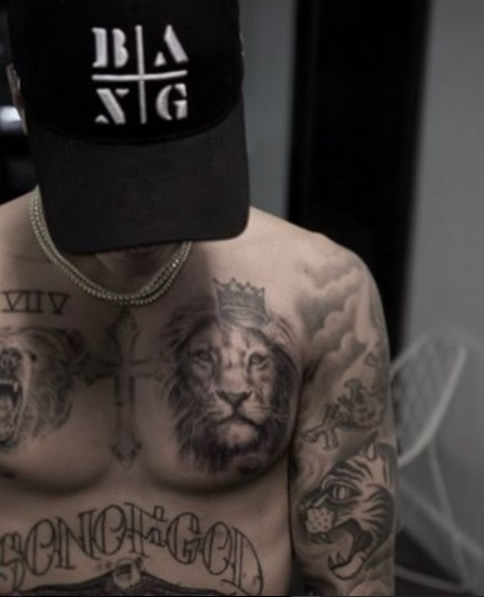 Although Justin Bieber’s lion tattoo was inked directly below his crown tattoo, overtop of his heart, a seemingly perfect opportunity to crown an animal historically known as the “king of the jungle,” the singer apparently chose not to go that route. Instead, the crown is inked in front of the lion and slightly off-center on the lion’s head. Being that Bang Bang shared a photo of Justin Bieber’s new lion tattoo on his Instagram account, it seems obvious that the ink was done at his shop in New York City, and it’s possible Justin’s bear and eagle tats were also done by the famed tattoo artist.

While Justin didn’t add a caption to the black and white photo his posted on social media of his new lion tattoo, Bang Bang captioned the pic he uploaded to his Instagram account, “Lion heart.”