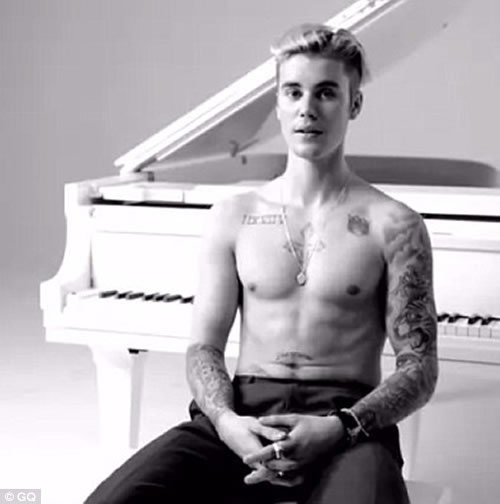 We may not know a whole lot about Justin Bieber as an individual, but now thanks to an exclusive interview the “What Do You Mean” singer recently gave with GQ magazine, we know a lot about Justin Bieber’s tattoos…and there are plenty of them to decipher. From his very first tattoo of “Jonathan Livingston Seagull” on his hip, to newer pieces, like his “Purpose” abdomen tat and “Patience” neck tattoo, Justin Bieber is quite the tattoo aficionado and loves adding new pieces to his collection, even though he describes the actual process of getting inked as “mad uncomfortable.”

The Biebs sat down with GQ for a video interview to go along with his March 2016 cover shoot, and in it, the pop star gives us the inside scoop on the meaning behind some of his more mysterious tattoos, including the “X” tattoo on his arm, the tiny seagull on his hip, and that pesky Selena Gomez (yes, it’s her!) angel tat on his wrist. Being that it was his first tattoo, Bieber started off by talking about the seagull tattoo on his hip, which he says is “based on this book that my whole family read. Everyone’s got it on their wrists. Basically it’s about this seagull who wanted to be more than a seagull.” 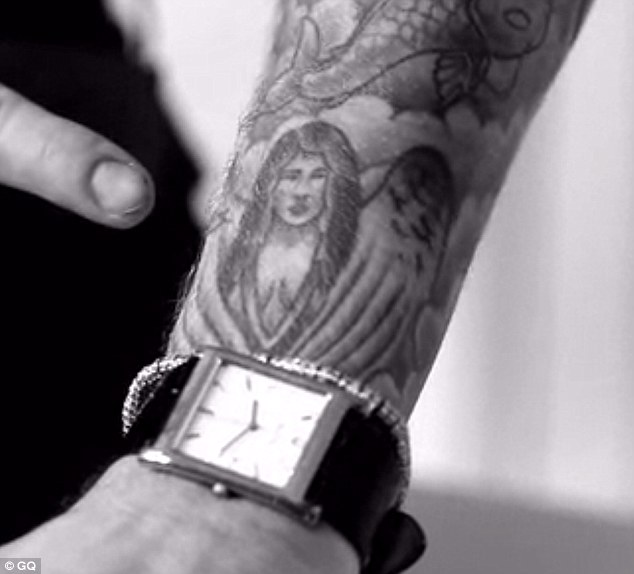 According to Justin himself, the “X” tattoo on his left arm stands for the unknown. “People might know the shell of me,” he says during the interview, “they might know the artist, but not necessarily me.” Speaking of exes, pointing at the angelic Selena tattoo on his wrist that has been the bane of his existence since it was first done, Justin said, “This is my ex-girlfriend. So I kind of tried to cover her face up with some shading, but people still know [it’s her].” The two tattoos that mean the most to Justin are his arm tattoo designed after his mother’s eye, and the tattoo on his chest of his mother’s birth date in Roman numerals. 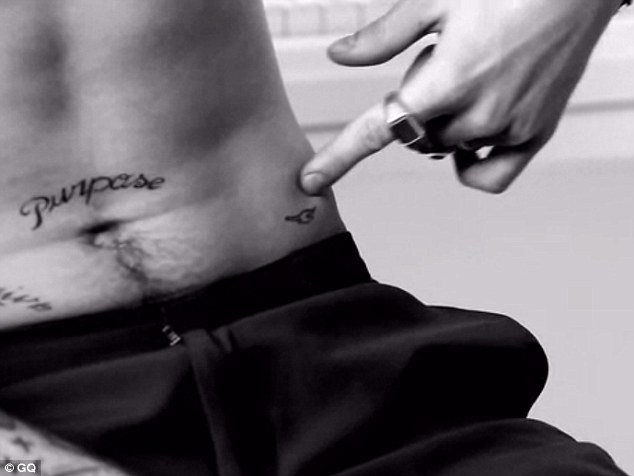 Some of Justin Bieber’s more obvious tattoo meanings include the Jesus tattoo on his calf, which the Biebs says, “is Jesus,” and his owl arm tattoo, which he says “signifies wisdom.” Justin Bieber’s favorite tattoo (so far) is his new angel wings tattoo on the back of his neck, and as for any future tattoos, there is one spot Justin Bieber doesn’t plan to get inked, and that’s his lower back. “I can’t really say that I feel lower back tattoos, on a male or a female,” he said, following that up with, “I thin k David Beckham has a little tramp stamp, and that’s no good.”